A few years ago I bought Kaco’s Alpha gel pens in Shanghai [1]Shanghai is also the city where Kaco is based. The Alpha pens are part of Kaco’s KacoGreen range.

When I asked an employee from a Kaco stall they told me that ‘green’ refers to the fact that the plastic from these pens can be recycled [2]It is rather cheeky to name something ‘green’ because it can be recycled, but I wouldn’t be surprised if the employee just made it up. Green might not mean anything here..

The pens feature a pleasant to touch rubberised grip section and there’s one of each letter and number. The letters, where most pens have the clip, prevent the pens from rolling off the table. The gel ink is black.

As I am currently clearing out I am selling these on eBay for 99p each. Figuring out postage to all countries is messy, but if you are interested and are not in the UK please contact me and I can look into what the cheapest postage is.

Below are two more videos: a funny video I found about the Kaco Alpha…

..and a video I made about some other Kaco products. 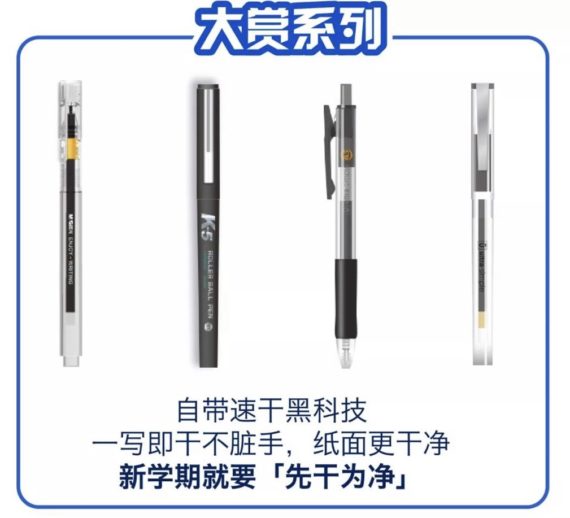 In many countries back to school offers have arrived in the shops. Why not do back to school in style: Sci-Fi style – with The Wandering Earth-themed stationery.

The Wandering Earth is a novella from Liu Cixin and also a Sci-Fi movie based on the novella. As far as I know the movie can be watched on Netflix in many countries.

I first came across Liu Cixin though his Remembrance of Earth’s Past trilogy – when the first book The Three-Body Problem was dramatised for a German radio station. A year later the dramatisation of the trilogy’s next book The Dark Forest was broadcast on the same radio station. By that time I was so hooked that I didn’t want to wait another year so I read the English version of the final book of the trilogy (or rather I let my phone read me the ebook on my work to and from work).

M&G, a Shanghainese stationery manufacturer that made several previous appearances on bleistift.blog, approached Frant Gwo, the director of The Wandering Earth movie for this cooperation.

The Morning Light Award Series won the iF award in 2019.

The Morning Light Star Universe Series is the girly high-end stationery from the Wandering Earth stationery.

The images in this blog post has been taken from an M&G post and fall under “fair dealing” as described by the UK Copyright service.

You can see all of the photos at

The Chung Hwa Drawing Pencil 101 is still the pencil of choice in Shanghainese Dim Sum Restaurants.

In the nicer dim sum places, like here in a branch of Sue Hsiao Liu, they are of course also nicely sharpened.

If you wonder where they come from or how many a restaurant would keep: here’s this branch’s ‘secret’ stash of sharpened Chung Hwas, ready for the customers.

If you want to read more about Chung Hwa pencils – here’s a selection of related blog posts form around the web.

This is a follow-up blog post to my previous blog post about the Bookstore at Oriental Pearl TV Tower’s Gate 8.

I also visited the amazingly dreamy Zhongshuge (钟书阁) bookstore in Shanghai’s Reel Mall this June. Have a look at this video, which gives you a short glimpse into this fantastic store. I didn’t add the music, it was playing over the speakers in the store.

Wishing you all a happy and healthy 2019.

I wish bookstores here in the UK would be a bit more like this one.

If you want to see more of Shanghai have a look at his blog post about Shanghai’s Baixin Stationery Store or at my other Shanghai videos. 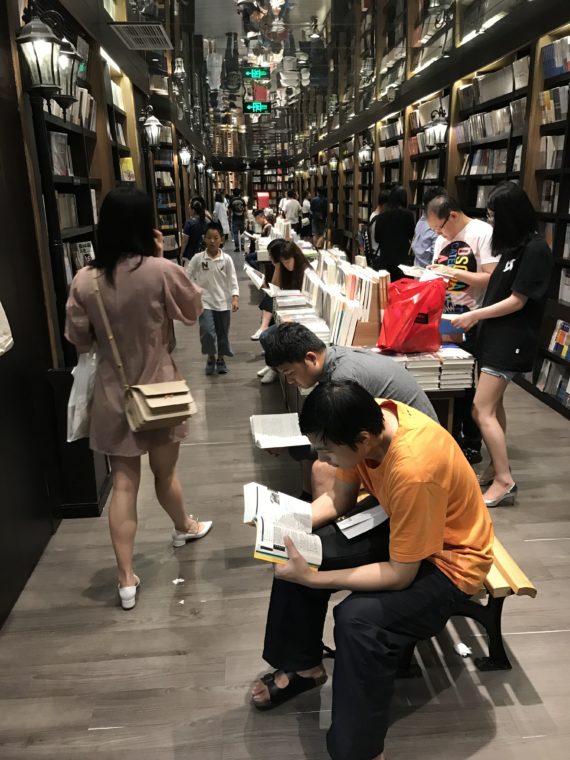