Not everyone shares this opinion, not even everyone in my household, but I think gel refills are so much nicer than ballpoint refills. My holbein x Rotring 600 3 in 1 came with ballpoint refills, so it was a prime candidate for an upgrade: replacing the ballpoint refills with gel or hybrid refills. I had the idea after A.J. talked about the D1 refills in a comment on my video about this pen.

I started by consulting Ana’s refill guide to look for some nice refills.

It didn’t take long to pick some cool stuff for my order, not only refills, also a new pen (the Jetstream Edge in white). To get free postage with my order I also picked a few more refills with the intention of improving my wife’s Lamy 2000 multipen (the original Lamy ballpoint refills often skip when you start writing).

What did I order? Jetstream refills, I like them based on my positive experience with them from the Hobonichi pens and from my Jetstream 4 in 1. I also got some Zebra refills. I haven’t used them myself but bought them before to go with a pen I gave someone as a gift.

When trying to fit the Zebra refills into the Lamy 2000 there was big disappointment. They didn’t fit. A quick look at the end revealed that the Lamy refills are slightly slimmer. Maybe D1 isn’t quite as standardised as I thought. I have to admit though that I don’t have much D1 experience as I generally prefer pencils and fountain pens.

A quick check with the callipers revealed that there are minute differences in the diameter. The Lamy M21 diameter is 2.32 mm, the Zebra JSB 0.5 diameter is 2.36 mm. 0.04 mm (0.0016 inches) difference. I also measured the Uni SXR-200-07 which turned out to have a diameter of 2.33 mm. Even though the Zebra didn’t fit the Lamy 2000 I managed to squeeze it into the Rotring 600. That left me with the uni for the Lamy 2000. The refill is only 0.01 mm wider but that was enough the turn a relaxing Sunday drive refill with butterflies (and the Loving You song in the background) into a heavy metal squeeze fest (with some Rammstein song playing from a broken stereo) with thoughts in my head that the Lamy 2000 will crumble under all the pressure. In the end it did, luckily, work. According to my own refill guide the D1 diameter is 2.35 mm. Who would have thought a fraction of a millimetre makes such a difference…

Since I talked about Holbein: Radio 4’s book of the week happens to be about him: The King’s Painter: The Life and Times and Hans Holbein.

Australian stationery chain Typo is becoming more and more common in the UK.

Their gigantic pencils are the best thing I found in store.

Since we’re talking about high street chains in the UK: The Pen Shop seems to focus on more affordable pens. In this case Lamy.

This blog post was first published on The Pen Company’s blog in April 2018.

1974 is a special year: In the USA, Star Trek: The Animated Series got cancelled; in the UK, ABBA won the Eurovision song contest in Brighton with their song, ‘Waterloo’; in China the Terracotta army was discovered; and in Germany, the VW Golf and the Lamy cp1 multifunction pen were launched. 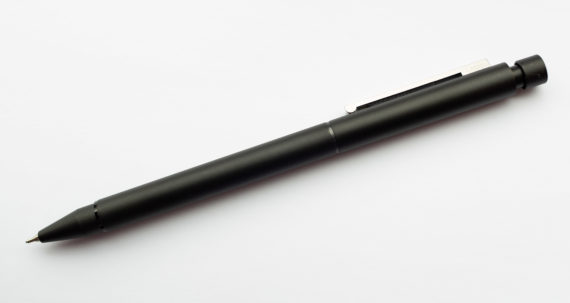 I’m happy to say that the cp1 pen/pencil is still with us today, so many years later. Designed by Gerd A. Müller, who also designed the Lamy 2000, the cp1 has seen quite a few additions to the line over the years — Lamy’s design history page shows that the twin pen was the first off the line, but there’s also a fountain pen, ballpoint pen, rollerball, mechanical pencil and tri (multifunction) pen in the cp1 series.

The Lamy cp1 twin multifunction pen lets you switch between a 0.5 mm mechanical pencil and a ballpoint pen. My cp1 has Lamy’s M55 orange highlighter refill instead of a normal ballpoint refill. This way I can write with the pencil in my diary but can also highlight anything that needs further attention.

You’ll find more information in my video review below:

Volume 2 of Lamy’s free, augmented reality (AR) magazine is out. 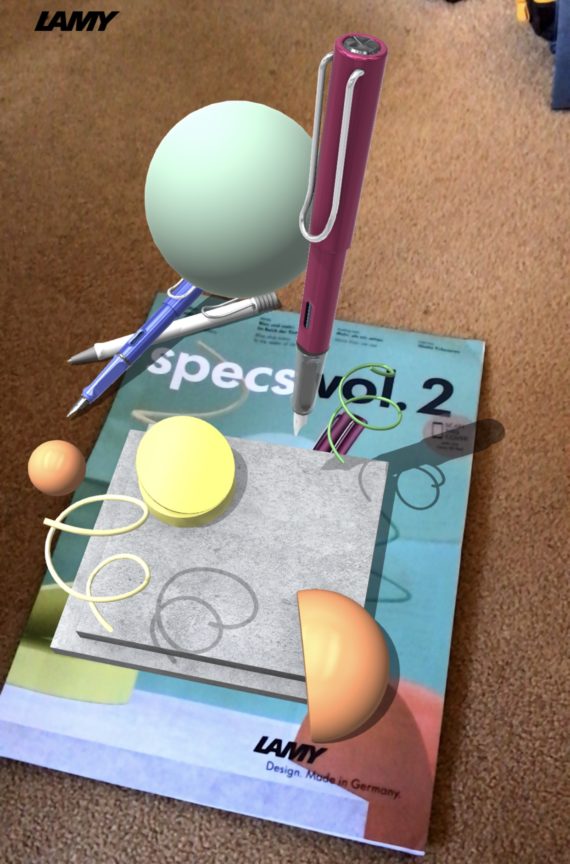 A screenshot of the AR app, projecting a Lamy Safari above the magazine cover

In case you wonder how long ago vol. 1 came out: it was in March.

Much more exciting than the augmented reality 3D Lamy pens, at least for me: Little videos in the articles that will come to life in the AR app, e.g. a video showing different pages in travel diary or a time-lapse video how Lamy’s store in New York is being set up. 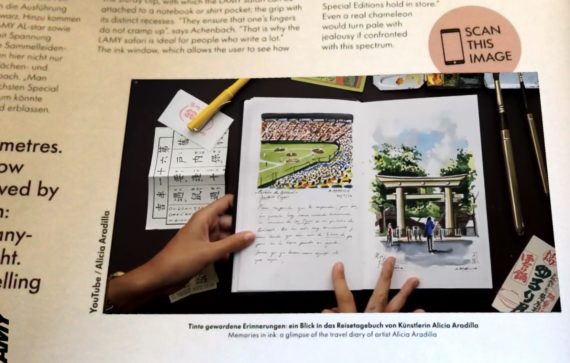 The AR app shows a video of someone flicking through diary pages where the magazine shows a photo.

Fitting with the article about the Lamy Safari there’s also an AR ‘artefact’ where you can change the colour of the Safari. 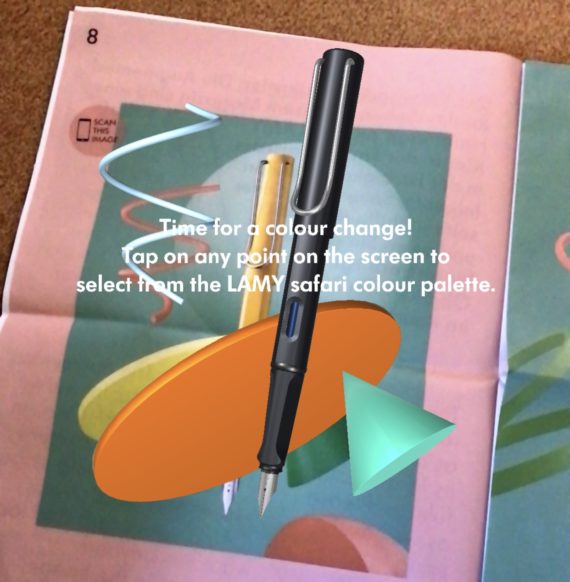 The app lets you pick the colour for the Lamy Safari

You can order a free copy of the magazine at https://specs.lamy.com/.