Here’s my (incomplete) collection of Noris spottings in the wild.

An icon I used to see on a daily basis, it looks like the Noris. Found in Okular, the document viewer in KDE 4.

Staedtler’s pencils’ image as typical pencils means that you can see them often when an association with school is needed or in related advertising, as in the example seen on the right. The advertising, probably created specifically for the UK and Ireland, was on a phone booth. A Staedtler Noris can be seen, even though the film is from the USA, where the Noris is not officially distributed and not available.

A photo of an Alessi sharpener in the shape of a beaver, with a Noris on the packaging.

Neil Gaiman posted this picture of his new pack of Noris pencils in 2016. 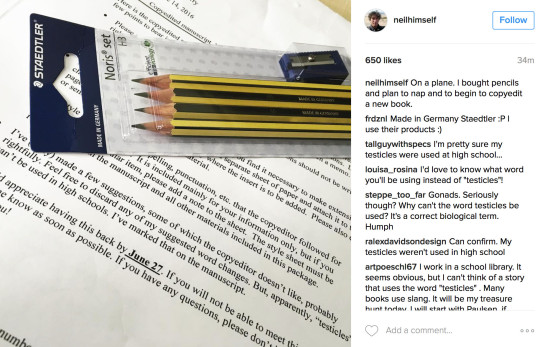 In episode 1 they are mainly using Staedtler’s Tradition. In later episodes the Noris is more common. In the second screenshot you can see Basil Fawlty (John Cleese) sharpening his Noris with a knife.

They also had some really nice pen trays in House of Cards.

Commissario Montalbano, the famous detective from Sicily, is a keen user of the Staedtler Noris1. Even though he’s driving around in an old Fiat Tipo his home is fantastic and is furnished and and decorated with classic and vintage bits and bobs, just like the grand homes of the criminals he is visiting. The Noris is a suitable pencil for him to use as it is the archetypal European pencil – even though it is a surprising choice as it is clearly a branded item.

Inspector Montalbano is not only a friend of the Noris pencil. He also likes to get his hand on the Noris stick ballpoint pen.

The next screenshot is from episode 705 “Liebeswirren” of German/Austrian/Swiss crime TV series Tatort. One of the actors in this episode from Munich was Christoph Waltz of Inglourious Basterds fame.

The Danish Prime Minister and his advisor on a trip to England. Each of them has a Staedtler Noris in front of them on the table.

More exciting Noris spotting from Sean:
The 6-part series from the BBC called The Story of England by Michael Wood features Staedtler pencils in several shots. Here’s a photo from this series, featuring a Welsh-made Noris.

To celebrate 350 years of Bleiweißsteftmacherhandwerk the Franconian and Bavarian regional news reported live from Staedtler’s factory on 25 September 2012. The reports were only a few minutes long.

I haven’t watched this film, but Sean was kind enough to tell me about it and to send me this screenshot.

Comrade John from the Pencil Revolution sent this screenshot from The Bletchley Circle, a murder mystery set in the famous1 Bletchley Park in 1952. I’m not sure though they would have used a Noris in H there2 – Staedtler took the Royal Sovereign Group over in the 1970s, so the code breakers would have been more likely to use Wolff’s Royal Sovereign.

In Episodes Sean Lincoln (played by Stephen Mangan2 ) is using a Stadtler Noris in the USA, even though it isn’t officially on sale in the USA. The character must have brought it from the UK, the desk is full of Noris pencils ..or, in the real world, this scene might have been filmed in the UK.

I haven’t watched this documentary either, but Sean was kind enough to tell me about it and to send me this screenshot.

A Noris in the first episode of the fifth season, used by juge Roban.

A Noris in Episode 3 of Uncle. This episode gives you the opportunity to admire the Noris in Nick Helm’s right and left hand and in his mouth.

MI5’s Alan Montag is using a Staedtler Noris. There are a lot of pencils in the series, but usually they are unidentifiable yellow/orange pencils.

A documentary about schools in Wales, featuring the Noris (formerly made in Wales).

…and another documentary, this time about using Chinese teaching methods in a British school.

A Noris at the cricket

The England and Wales Cricket Board’s “ECB.tv” interviews fast bowler Mark Wood after the team’s match against Pakistan A.  The reporter has tucked an end dipped Noris HB (by the looks of the dip’s colour) behind his ear.

Upcycling with a Noris

Another Noris in the wild. This time: during Saturday evening prime time on Channel 4 ..on George Clarke’s Amazing Spaces.

Upcycling expert Max McMurdo is using a Noris to design a floating home, built from a shipping container.

10 Noris in 9 seconds in the second episode of the fourth season of the Channel 4 TV series Catastrophe.

French police procedural and legal drama series doesn’t disappoint when it comes to the Staedtler Noris.

A Noris being used in Copenhagen, seen in the UK on BBC News.

The Noris on the cover of a single by Von Wegen Lisbeth.

A Noris in Skydance’s movie “Luck”.

I believe that the use of the screen shots of the Noris pencils falls under “fair dealing” as described by the UK Copyright service.

1 thought on “Noris in the wild”