You might have noticed that it’s been very quiet here on Bleistift. That’s not because I lost interest in pencils, but because my job has been keeping me more than busy. Just in case you wonder – no: I didn’t change jobs and didn’t get promoted. In the past, there were up to fifteen blog posts a month, but for now, probably up to and including January there won’t be many blog posts. I might also have to suspend the Pencil Pot of the Month series for now. A shame as it has been running continuously for exactly 24 months – the two years from October 2015 until September 2017. I will, however, try to give occasional life signs every now and then, like I do today, until blogging can resume again as usual.

Since we’re talking about the Pencil Pot of the Month: the one from August 2016 was from the Danish chain ‘Tiger’ [1]Outside our store is labelled Tiger, but the in-store newsletter refers to the company as Flying Tiger Copenhagen which has a shop in the city where I live. The last purchase I made there was Tiger’s version of the Blackwing pencil.

In the introduction I wrote that I am quite busy, so am not following what’s going on in the pencil fandom (with very few exceptions). That’s why I didn’t know that there seems to be some controversy going on about the new Danish Blackwing remake. I was told that apparently, some CalCedar/Palomino Blackwing fanboys are pretty upset about there being a copy of the Blackwing. I don’t know what arguments have been made or where they have been made, but here are my initial thoughts after having used the Danish Blackwing for a while.

We could start by talking about the Ship of Theseus and what makes the CalCedar Blackwing [2]..which I will refer to as the new Blackwing a descendant of the original, but in reality I don’t see much of a link.

Well, what happened is: the Theseus sunk. Somebody else registered another ship under the same name.

Here’s why. There used to be a pencil called Blackwing. The company behind it stopped making this pencil. The owner of the trademark didn’t renew the trademark so it lapsed. An unrelated company took the trademark and manufactured a similar looking pencil, the main similarity being the characteristic ferrule. The lead recipe is different. It’s made in a completely different country. There is no continuity, nothing that links the original and the remake except the name ..and with me being German I am automatically reminded of the German saying “names are but noise and smoke” [3]apparently this saying is from Goethe.

My point here is: don’t complain that Tiger’s pencil is a copy of the Blackwing. The new Blackwing from CalCedar/Palomino is itself only a copy with no link to the original.

What CalCedar did do is bring a pencil (that was previously mainly known to pencileers, molyvophiles [5]Someone passionate about pencils (see this post) and molyvologues [6]A student of pencils (see this post) through anecdotes and the odd poem) to the mass market. In my 2010 blog post I wrote that the new Blackwing might become the new Moleskine. With its price tag I think it must have an even higher profit margin than a Moleskine – and like the Moleskine you can now buy the new Blackwing on the high street in the UK. Something the original Blackwing never achieved. I guess that’s the power of marketing – you create a link to something greater in people’s mind and make it a Veblen good. People who wouldn’t have bought 3B, 4B, 5B pencils in the past are happy to pay a premium and because of the characteristic ferrule it’s easy to show off that it’s a posh pencil.

With that in mind, I think the Danish Blackwing is as much a modern Blackwing as the CalCedar one. Actually, I like it even more than the CalCedar remake, because it actually keeps the point. Something I don’t like about the Palomino Blackwing, as explained earlier. If you write small with Tiger’s Blackwing you don’t have to sharpen it every few words often. Ok, the wood on the Danish [7]..but Made in China one doesn’t look as good, but I can buy 4 for £1, so 12 are £3, whereas 12 CalCedar ones are £29.95 in the UK, nearly exactly ten times as expensive. For such a price difference I take the one that keeps the point ..and is therefore usable for my purposes [8]Your mileage may vary. If you are an artist you might be after a different pencil than me. any day.

PS: What a shame that Tiger didn’t put 602 in the item or barcode number, then I could have referred to the Tiger Blackwing as a 602. 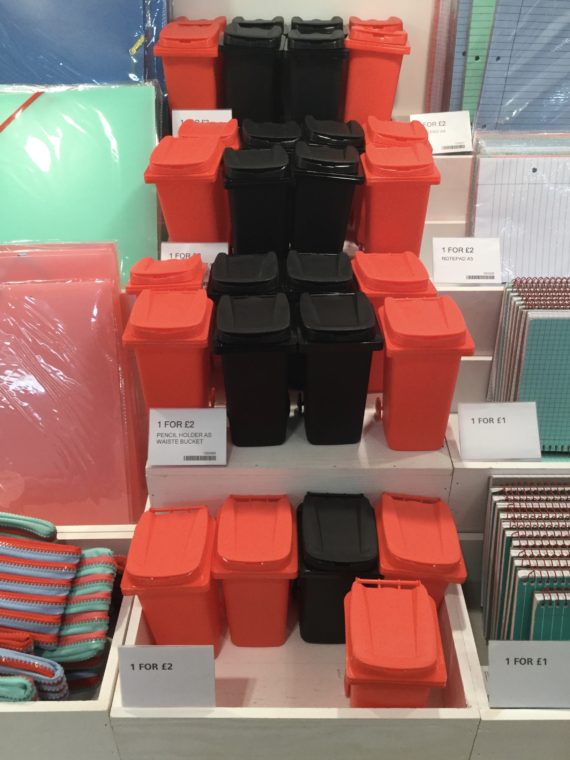 Description: A pencil pot that looks like a wheelie bin

Further information: Seen in a Tiger store. Tiger is a Danish retail chain. I’ve bought stationery there in the past. In one of his videos TJ Cosgrove mentioned that he is using their notebooks, but I haven’t tried those yet. While in the shop anyway I bought their copy of Google Cardboard for £3.

Luckily I, Langskæg [2]the viking name given to be by Henrik, got invaded by the trading, not the raiding kind of Viking, thanks to Henrik’s generosity. You might know Henrik, who is from Denmark, from his comments on different stationery blogs.

The Viking brand was registered in 1913 and the first pencils were produced 100 years ago, in 1914 [3]To commemorate the 100th anniversary Viking has released the Viking 100, a fountain pen (top right in the picture). , when the Danish matchstick factory H. E. Gosch started making pencils. The pencil branch of the matchstick factory was the brainchild of Folmer Preisler, who married the daughter of the matchstick factory’s owner. The beginning wasn’t easy, but after the two World Wars Viking was doing well. Their problems only started in the early 1970s, when a Swedish competitor bought the matchstick factory which, at that time, was still Viking’s parent. Just some context: At that time the Swedish matchstick maker Svenska Tändsticksaktiebolaget had a monopoly in Europe and many other parts of the world – when I was a kid these were the only matchsticks you could get (they had a monopoly in Germany from 1930 until 1983). After being taken over the Danish pencil factories closed down – the new owner was not interest in pencils. Later Viking ended up with Esselte, who used to own Dymo and who still owns Leitz. In 2010 Viking became Danish again when it was bought by Creas. Since Creas took over they started moving production back to Denmark or as close to Denmark as possible. They also put an emphasis on simple, good design and environmentally friendly production.

I’d like to thank Henrik for all the nice Viking stationery I have received. He’s not linked to Viking, doesn’t work in stationery and paid for the goods out of his own pocket.