Staedtler’s Noris is near-daily occurrence on UK TV. Thanks to its ubiquitousness in schools it is sure to make an appearance in stock footage about primary schools. There is however a new place where you can admire the Noris on UK TV: during the day and in the evenings: in TV advertising for an erectile dysfunction blood test. Yes, I was also surprised they show this during the day. You can see a Noris triplus in two shots. First the lead is intact, then the lead is broken off. Subtle?

You can watch the whole advertising below. I’m surprised that at the time of posting this blog post it only has 100 views. You always think that companies that pay for nation-wide TV advertising must be quite big, but maybe the company behind this is rather small or just doesn’t promote their videos online.

On to the next topic: A buyer from one of my eBay auctions mentioned the Pencil episode of The Boring Podcast to me. I listened to this Podcast (or the radio show version) when it was new and I enjoyed it, but somehow stopped listening, even though it still is still in my podcast app. That was a mistake. This show originally caught my eye because the presenter is James Ward, the author of the Adventures in Stationery book. By the way, I never got a reply to my question what his favourite pencil is, but I might try again in another six years. The pencil episode‘s main contributor is Brian Mackenwells. He’s talking about many pencils, including the Tombow Mono 100, the real Blacking and the CalCedar Blackwing, the Noris, the Columbus and many more. Have a listen – and also have a look at Brian Mackenwells’ cool typewriter products!

Today: another Seen In The Wild blog post, but this time with a twist: at the end there’s some Heard In The Wild…

The Stein in the title of this blog post is not linked to Stein bei Nürnberg, where Faber-Castell’s headquarter is. The first part of this blog post is about Rick Stein, a famous British TV chef. In his latest BBC series, he explores Mexico. As usual, he writes down recipes. In his series about China, he used a pencil, shown in a previous blog post. This time he used a Lamy Safari (open images in new tab for high resolution).

He’s not the only celebrity using affordable Lamy pens in public: Nick Hewer, from the UK version of The Apprentice does so, too. In reality, people using Lamys in public are a rare sight, at least where I live. I remember seeing someone from a British university (but who is not British) using a Lamy Safari Lime Green Fountain pen at an SAP course I attended in Ireland in 2008. In recent years I have (twice) seen Chinese students using Lamy Safaris at my University/employer. If I add it up I have to say that I’ve only seen Lamys being used three times, in the last ten years, on the British Isles, but all three times the user wasn’t British. Parker on the other hand… if I wanted to count Parkers I’ve seen in the wild, that would be a very high number.

Since we were talking Rick Stein and British TV: There seems to be this idea that museums, and most of all pencil museums, are very boring. This seems to be a recurring theme, especially in comedies and sitcoms.

Here’s an animated gif from a very recent episode of a TV show with Johnny Vegas: Home from Home.

In another show of his, Travel Guides (episode Lake District, 2015) from ITV, there’s a conversation spoken in very ridiculing tone:

I can’t believe this is a museum on pencils.
Really.
This is the only pencil museum in the world.
Ha ha ha! No shit.
Back to the BBC. In episode Black Eye of the BBC comedy Coming of Age (2010) there’s even audience laughter to make sure the viewer understands that going to a pencil museum is a ridiculous thing sane people wouldn’t dream off.
Imagine all the lovely places I’ll be able to drive you.
Like the pencil museum! Ooh!
Imagine that, Jas. Pencil museum.
Wow. What a treat(!) (Audience laughs)
Let’s speed things up a bit: Movie Sightseers (2012)
Pencil Museum.
I know how much you wanted to see that(!).
In case you are wondering about the exclamation mark in brackets. In subtitles, at least in the UK, that’s a sign for irony or sarcasm.
..and back to the BBC. Grumpy Old Holidays (2006). Please don’t forget to imagine the ridiculing voice when you read this. The idea is no one would go there unless the weather is horrible.
I have something to do with the weather, I am the rain goddess. They always say to me, “The farmers will be so grateful.” And I say, “Fuck the farmers.”
The Keswick Pencil Museum in Keswick must have, you know, oh, they must
look out of the window every day at the Pencil Museum and go, “Look at that, you can see the isobars “huddling together, we’ve got five days of continuous rain and storms coming- ker-ching!” Because, God bless it, your first port of call on holiday wouldn’t be a pencil museum, would it, normally?
There are hundreds of lovely rainy day attractions and activities like this to immerse yourself in.
It’s not like it’s just pencils. It’s different coloured pencils. It’s different sized pencils. Pencils you can pencil with, even.
Well, I enjoyed my trip to the pencil museum, read more about it in this 2012 blog post. This ‘making fun of the pencil museum’ isn’t new, last year I mentioned an occurrence that happened on BBC radio.

..but now people even invent fake pencil museums to make fun of when they are in a place without a pencil museum. In this case Jeremy Clarkson, Richard Hammond and James May. For their Amazon show The Grand Tour they were in Luzern in Switzerland. They need a museum that incorporates boredom while they visit a chess museum so they pretend there’s a pencil museum near Luzern. The point in this episode is that no one would go there, but the museum supposedly has a charging point for Richard Hammond’s electric car, that’s why he keeps dragging them to boring museums. 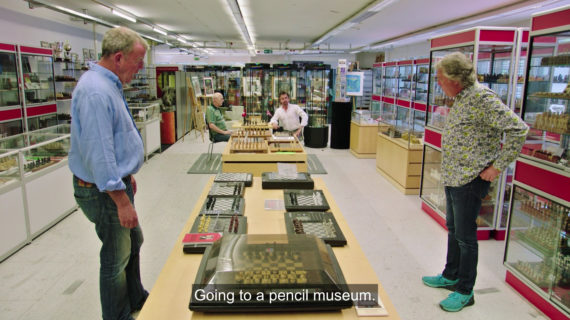 Well, let’s end on a positive note: Keith Houston, the author of Shady Characters (2013) had his recent book The Book: A Cover-to-cover Exploration of the Most Powerful Object of Our Time presented as Radio 4’s book of the week. For the next few weeks, you can listen to all episodes online at https://www.bbc.co.uk/programmes/b0b2hr55.

Last month I sent an email to James Ward, the author of Adventures in Stationery, asking him about his favourite pencil. I’m not surprised that I didn’t hear back from him, but my email might have triggered another reaction (or not): I got an email telling me about a competition where you can win a signed copy of his book.

A quick look at the terms and conditions shows that unfortunately this competition is only open to UK residents.

You can find the competition and a Q&A with the author here.

After Lexikaliker and Sean: my blog post about the Adventures in Stationery book.

This book must have been mentioned in all the major British newspapers and I have to say that it’s very nice to see that there is such an unexpected interest in stationery. I hope the readers will be as enthusiastic about this book and stationery as the newspapers.

Unfortunately it took unusually long for my order to arrive, but thanks to Sunday deliveries I got my copy today. I certainly didn’t expect such a well made book for under £10. Let’s take about the non-content aspect first: Hardcover, the rubbery feel to the cover which became popular a few years ago, nice, rounded corners, and  amazingly well put together (and printed and bound in Italy). Even the ‘ribbon’ on the inside of the spine keeps to the outside’s colour theme. 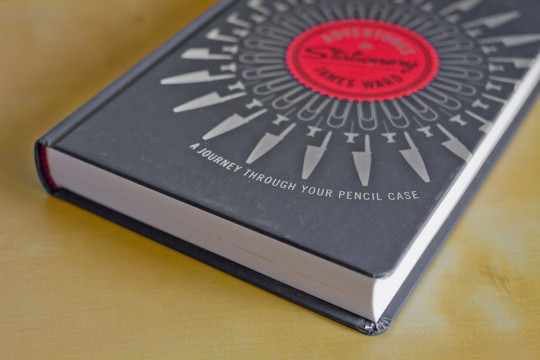 I didn’t have a good look yet, but I had a quick look at the pencil chapter and my first impressions: the content is extremely exciting.

First thought (pencil chapter): nice – finally all the information that is spread across different sources offline and online in one place. It would have been nice though to see references to the original sources, e.g. Petroski’s book, Derwent’s material, etc. – but then, this isn’t supposed to be an academic article …so references might not go down well with most readers and might interrupt the flow.

Second thought: What’s that – Sean being mentioned‽ That is unexpected. An analogy to Moleskine – what a good way to get the point across. The title of this blog post is a reference to Sean, taken from the book.

I’m very much looking forward to reading more of this book.