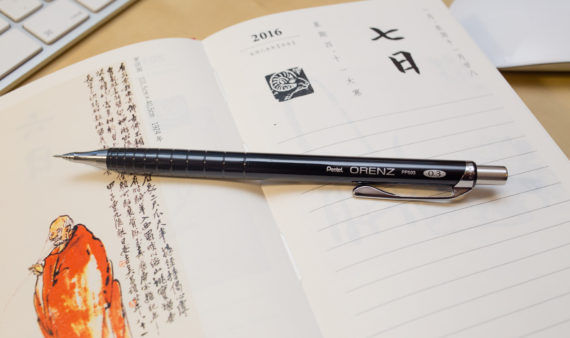 Another blog post about my stationery adventures in Shanghai.

This time I want to show you another mechanical pencil I bought: The Orenz in 0.3.

This is my fourth Orenz now, but the first one in 0.3 mm. I guess you might say I’m overdoing it a bit, but it is a really nice pencil, so I couldn’t resist trying out the 0.3 mm version.

When I bought it I had certain expectations.

Hypothesis 1: The 0.3 mm will need more force to slide the sleeve than the 0.2 mm version.

This is based the assumption that there is a bigger area of contact between lead and sleeve and between the sleeve and the rest of the body, which would result in more friction.

Hypothesis 2: The Orenz in 0.3 mm will need less force than the Staedtler Microfix S 0.5 to slide the sleeve.

This is based the assumption that there is a smaller area of contact between lead and sleeve and between the sleeve and the rest of the body, which would result in less friction.

I bought the black version for 50 元  (~$7.60; £5.20; €7) from Shanghai Jiajun Craft Gifts Co. Most stores on FuZHou Road charge 55 元, but one or two charged 50. I bought mine in one of the cheaper shops. Some of the Orenz in the shops had the Japanese packaging, some had the English packaging.

On the web I have seen a gorgeous dark green version of the Orenz, but I’ve only seen it online so far – it wasn’t available in any of the shops I visited, so in the end I bought the black version because I didn’t like pink and I already have the white and blue versioning 0.2 mm.

Well, I wasn’t keen on the black version when I bought it, but now I started to like it. With the right light the shiny black surface can look really good. 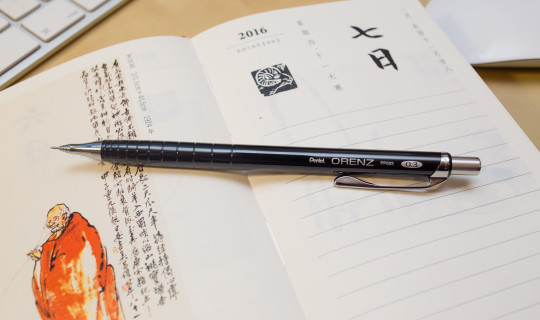 What about the sliding sleeve?

So what about the force needed to slide the sleeve.

Hypothesis 1 was correct. When I checked I had to use 1 dN – 2 dN to slide the sleeve, certainly much more than what is needed for the 0.2 mm version.

To my surprise Hypothesis 2 was not correct. I had to use more force to slide the sleeve of the Orenz in 0.3 mm compared to my Staedtler Microfix S 0.5 77305.

To qualify this point: Other Orenz and especially other Microfix might behave differently. Some leads might have a slightly different diameter than others, which might result in different numbers when testing the force needed. Plus: my Microfix was bought in the 1980s, Staedtler stopped selling them in 1988, so maybe it got better with time. On the other hand, maybe Staedtler just did a stellar job with the Microfix and created a sliding sleeve that is unsurpassed by modern pencils.

Other items I bought in the shop

Other items I bought in the shop include an Indonesian Castell 9000 and a 12B pencil from Lotory.

I have added the Orenz 0.3 to my sliding sleeve table.

The background of the first photos is a tribute to Lexikaliker, who kindled my interest in the Orenz – just that my background isn’t a Tenugui, but a Furoshiki – in my case a non-woven wrapping sheet from Muji.

I have discussed the Indonesian version of the Castell 9000 in a previous blog post.

To see the Orenz in its full beauty please open the Orenz images (the first three) in a new tab/window. 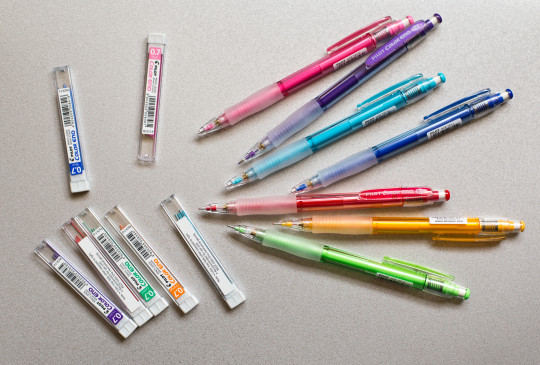 The reason why I wanted to try the Color Eno for a long time is its sliding sleeve, more about these in one of my previous blog posts [1]I thought I found out about the Color Eno on Lexikaliker’s blog, but couldn’t find it when I looked again. . I sometimes use coloured pencil leads at work. One of my dedicated pencils for coloured leads was a Faber-Castell Grip Matic (the auto advancing kind). If you know how to use it it was fine, but every time a colleague would grab it to write with it they would break the soft coloured leads and generally clog the Grip Matic up. An easy to handle mechanical pencil for coloured leads did therefore sound like a really good idea.

My first impressions of the Color Eno are not so positive. It is a nice pencil in itself, with such a close similarity to the Super Grip [2]It didn’t realise this when I saw pictures of the Color Eno. I only noticed it now that I have it in my hands (both from Pilot), but the feature I wanted it for, the sliding sleeve, doesn’t work for me. It does work for me when I use the Super Grip, though [3]The Super Grip must have been the first mechanical pencil I bought after I arrived in the UK in 2001. It has been available since the 1990s. The Super Grip Neon was released in 2014.. The sleeve doesn’t slide back when I write. It might work for others, especially if you hold your pen in a vertical or near vertical position. My first idea was that this is because or a combination of force needed to push the sleeve back and sleeve thickness. After comparing the Color Eno to other sliding sleeve pencils I think the thickness of the Color Eno‘s sleeve doesn’t really matter that much.