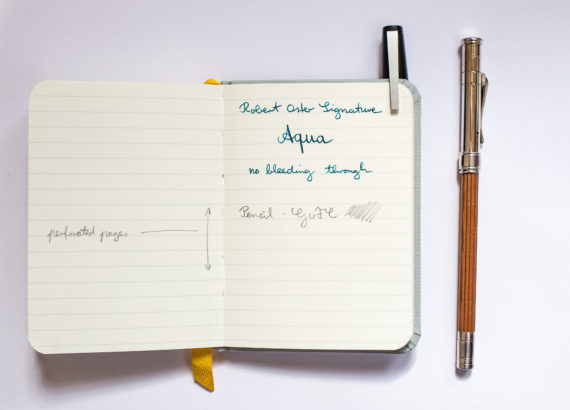 Like many people, I found out about Baron Fig’s 2013 Kickstarter from The Pen Addict podcast (it was episode 71). Back then the notebook didn’t have a name yet.

After the Kickstarter goal was reached the notebooks were sent out, got very good reviews and luckily Baron Fig kept making them post-Kickstarter and even created more products, becoming the Baron Fig company you see today.

I don’t think there’s is much I can add to the existing reviews in terms of new information, so instead I want to give you the European perspective on this notebook.

The Baron Fig is difficult to get on this side of the pond. I haven’t found a shop selling it in the UK, but luckily shipping from the States is actually quite cheap. Postage for the $12 Confidant Pocket, for example, is only $2.95. This seems to be achieved by sending the notebooks through Germany (Field Notes send their notebooks through Sweden). The problem in the UK is that the moment you spend more than £15 you have to pay VAT [1]..but sometimes customs forget to charge you, which usually goes hand in hand with a hefty surcharge, how expensive depends on the carrier. When I was still living in Germany I was less often hit by these charges, but I don’t know whether this is still the case. The point here is that depending on which country you live in there might be unwanted extra charges if you order from the States.

The Count in Disguise

$12 (+$2.95) for a notebook, roughly A6 size [2]The Confidants are all a bit smaller than the equivalent A paper size, [3]..reminds me of the Lichtenberg drawing from this blog post. is not cheap, but once you look at this notebook’s competitors the price seems quite reasonable.

Cloth bound notebooks sell for a premium. They’re somehow even more expensive than leather bound notebooks. The closest competitor for the Confidant is probably the Linen Bound Notebook from the late Count’s [4]Usual disclaimer as mentioned in previous blog posts: He is not really a count. According to Part 2, Section 1, Article 109(2) of the Weimar Constitution privileges based on birth or social status … Continue reading Graf von Faber-Castell [5]Abbreviated: GvFC for easier reading. series, which you can see in this previous blog post.

In fact, they are so similar, the Confidant is basically a version of the linen bound GvFC notebook with rounded edges and perforated pages (that’s where the title of this blog post comes in). I’m not sure whether this is accidental or a result of Baron Fig’s Kickstarter approach of  ‘asking people all over the world what they like in a notebook’. The GvFC notebook has been around for a while [6]I am not sure when it came out. I got my first one in 2010, so some of the people asked might have suggested features based on the GvFC item.

In terms of similarities: both, the Confidant and the GvFC notebook are cloth bound and probably [7]I am not 100% sure. The Baron Fig Kickstarter mentioned 100g/m2 paper, but in an email I got from Baron Fig they mention 90g/m2 paper. use 100g/m2 paper. I have mentioned two of the differences already: the Confidant has rounded edges and perforated edges. Other differences are: the Confidant has more paper to choose from (dot grid, blank, ruled), the GvFC notebook has more colours to choose from (five different linen colours), the bookmark is different (width and colour) and most importantly: the price is different – quite different.

My Confidant is well made, but not as well made as the Graf von Faber-Castell notebook. Inside: mine has some materials/bubbles under the paper inside the lid, making it uneven. Outside: the cloth isn’t tight around the spine and some pages were not separated properly, as you can see in the video below. Stephen from Pencil Talk had the same problem with his Flagship (A5) Confidant [8]Mine is the Pocket one (A6). .

One way of looking at his would be to say that it shouldn’t happen to a small notebook that costs $12, but on the other hand, the similar GvFC notebook costs more than twice that amount, so the Confidant still seems good value for money.

First I thought my notebook doesn’t lie flat, a problem also described by Discover Analog, but then I realised that the Baron Fig description of ‘Opens Flat’ [9]Found at the bottom of https://www.baronfig.com/pages/confidantbuy" target="_blank" rel="noopener noreferrer">this page. refers to the pages being flat enough to write on, it doesn’t mean that the covers should lie flat on the table.

One more thing to mention about the paper: Andi Talarico from Baron Fig told me that the Vanguard and the Work/Play II use Baron Fig’s new upgraded paper, while the Confidant is still using the previous paper.

Let’s have a look at the paper in terms of graphite performance.

As part of this comparison I have only compared the paper to Field Notes paper [10]..as they are the paper samples I have redone after discovering the colour base paper shift issue discussed in the Black Ice post..

To find more about how the paper is tested, please check the Ingersoll post.

Most of my inks are quite well behaved. Not surprisingly the paper dealt well with ink.

So I thought I take some of my slightly less well-behaved inks out, in this case, a waterproof ink, just because waterproof ink often goes deeper into the paper. The images below show that the waterproof ink didn’t bleed through and the reverse side of the paper was unaffected (open images in a new tab to see the high-res version).

To sum this blog post up in a few words: Quality control could be better. The paper is excellent. The notebook isn’t cheap, but good value for money compared to similar notebooks.

I would like to thank Andi Talarico from Baron Fig for the review sample I used for this boig post.