If blog posts had soundtracks this post would play Billy Ocean’s “When the Going Gets Tough, the Tough Get Going” in the background [1]Please hum along if you like. I assume that won’t infringe any copyright.. 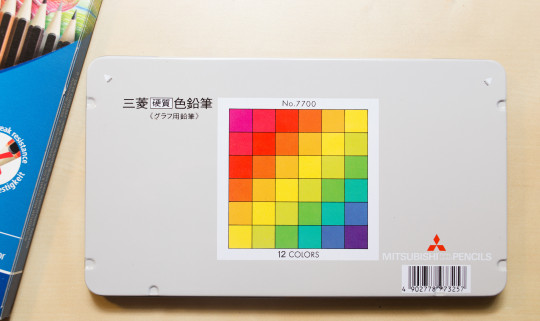 I ordered my Mitsubishi 7700 in February 2015 and received them in March 2015. Back then I paid £9.82 (~$14.10; €12.90). You might have read in the news about what happened next, Lexikaliker covered this, too: End of last year Mitsubishi/uni decided to stop producing some of the 7700’s colours and prices have gone up a lot since then. Reminds me of what happened not long before that, when Hagomoro Bungu went out of business and people started hoarding their chalk [2]At the time of writing a box of this chalk sells for £168.05 on Amazon.. Well, the Mitsubishi 7700 has now more than doubled in price and the Amazon seller I bought from is currently selling a set of 12 Mitsubishi 7700 for £21.14 (~£30.30; €27.70). I wouldn’t be surprised if prices will rise even further.

First I looked at how dark/colour intense the line is that these pencils leave on paper. To do that  I sharpened the pencils so that the point of both pencils is a conical frustum (a cone without the top). Both pencils’ points/frustum’s had the same top radii. This was achieve by sharpening with a Deli 0668 where I ‘dialled’ the point adjuster back. I then used a force of 1.8 N [3]With less force the lines would have been quite light. You do need to use quite a bit of force when you want to write with coloured pencils. and a speed of 25 mm/s to move the pencils across the paper [4]Actually, the pencil was stationary ;^) and I moved the paper.. The pencil had an angle of 90°, so axial pen force = normal pen force. The paper was from a Brunnen – Der grüne Block, which I have used many times before on this blog. 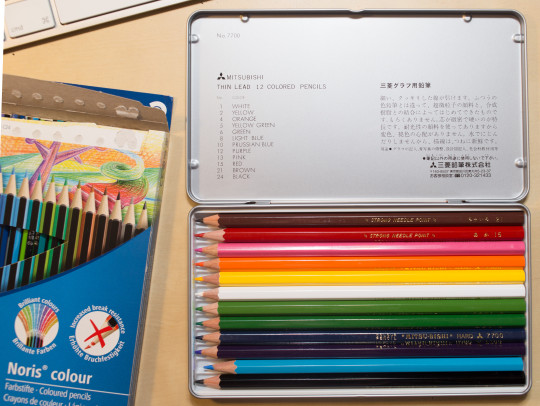 Come on you reds [5]No, I don’t follow football, but couldn’t resist.

Come on you blues [6]No, I really don’t watch football. 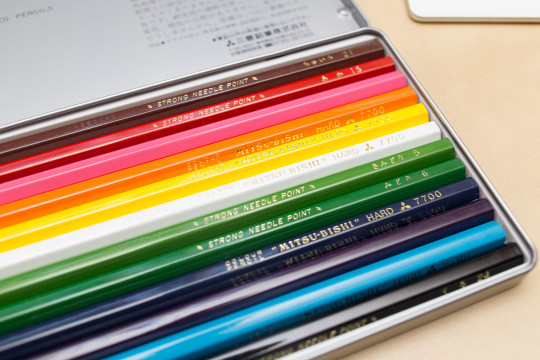