If you have ever come across products from the Chinese manufacturer Redcircle they were probably copies of mechanical pencils from Rotring, but a little known fact is that Redring does not only copy Rotring pens, they also sell leads. There are of course standard graphite leads from Redcircle, but what I found more interesting was their pack of mixed colour leads, available in 0.5 mm and 0.7 mm. 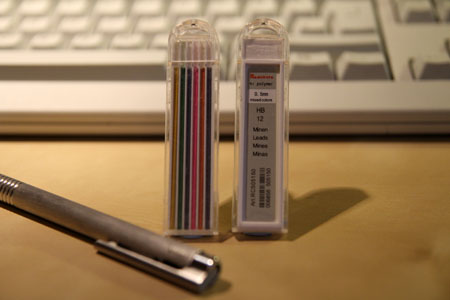 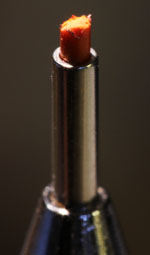 Both 0.5 mm and 0.7 mm leads are unusually hard for coloured leads. The hardness of the Redcircle leads is somewhere between traditional coloured leads and graphite / polymer leads. For people who are holding their pencils at a very low angle (like me) this might sound like an advantage as most coloured leads are very soft and will break easily.((Generally I find the problem of breaking coloured leads so bad that I bought a Staedtler REG 925 85 05 Regulator. As you might know, the regulator allows you to set it in such a way that the lead is only advanced a tiny bit, very useful for avoiding lead breakage.)) In this case however the disadvantages that go hand in hand with this harder lead are just too annoying. Compared to other coloured leads the colours are much less intense, they do not seem to “stick” to the paper, even if use more pressure when writing. This effect if worse for some colours (blue) and better for others (red). Generally this problem seems to be worse for the 0.7 mm leads. Many of the Redcircle colours are also quite grey once they are on paper and have an unpleasant look to it.

+ Harder lead than any other coloured leads I know, less likely to break

+ Colours less reflective than most other leads

– Colours have an unpleasant greyish tone compared to other leads

– Scratchy, light-marking and less colour-intense than other leads

– More difficult to erase than some other leads

– The 0.5 mm leads seem to be a bit wider than other leads, making it a tight fit in some pencils

I was surprised to see hard colour leads from a Chinese manufacturer as according to my experience Asian manufacturers and consumers seem to prefer softer leads. Unfortunately I was disappointed: These leads are much worse than most other coloured leads. 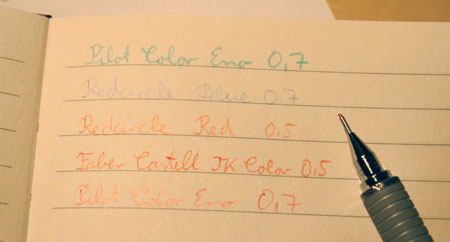 Redcircle and other leads on a Brunnen Kompganon Anno 1877

You can find a review of the Staedtler REG 925 85 Regulator at Pens and Pencils.