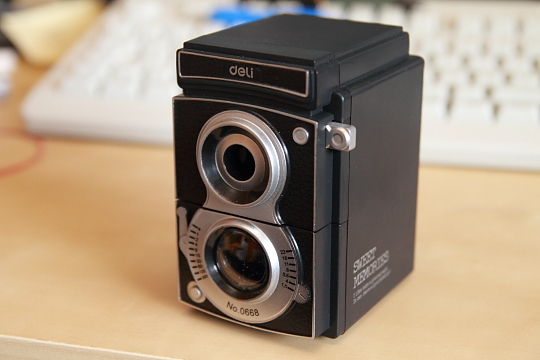 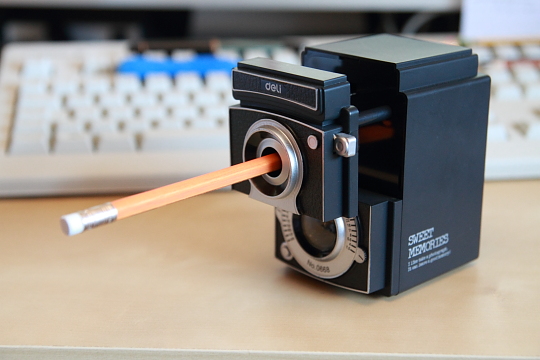 After my good experience with another Deli sharpener I could not resist and bought this TLR shaped sharpener, the Deli 0668, in December 2010 when I saw it in it in Shanghai – in a stationery shops outside a university. Deli’s headquarters are near Shanghai, so I it is not surprising that this sharpener was inspired by a Shanghainese-made Seagull TLR [1]Seagull TLRs were basically Rolleiflex copies. Outside China Quelle rebranded Seagull TLRs and distributed them as Revue cameras (40 years ago). There are still companies out there that distribute … Continue reading. 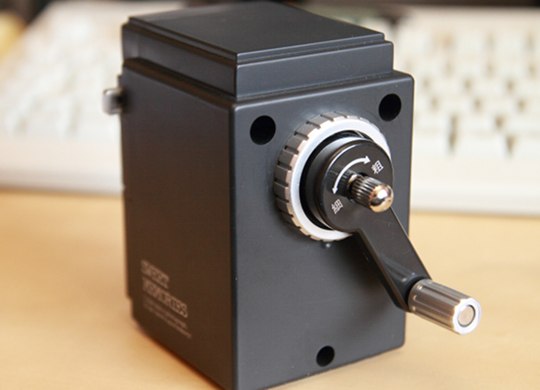 The 0668 has a single rotary blade cylinder, similar to the one in the 0635. There is also a removable tray for the shavings. The clamps that hold the pencil during sharpening have a rubber surface so they won’t damage the pencil’s surface. Additionally, there is an automatic stop mechanism that will prevent you from over-sharpening a pencil. The main difference between the two Deli sharpeners is that the 0668 produces a shorter (and blunter) point. It also features a point adjuster switch similar to the one seen in the Carl Bungu Ryodo BR-05 pencil sharpener, reviewed at pencil talk and in the Dahle 133 / M+R 0981, reviewed at Lexikaliker. The blunt setting at the extreme end will result in a “point” diameter of about 2mm is only suitable for colour pencils with a wide core. Normal graphite pencils do not have a wide enough core for this setting.

Conclusion: A great sharpener for a great price. I will not use the blunt setting and, to be honest, I do prefer the longer point I get from the Deli 0635 much more. It is nevertheless a sharpener I will enjoy using. It is currently in my office where I use it for all kinds of wooden pencils, but not for pencils that use difficult to sharpen material, like the Wopex, as my experience with the Deli 0635 has shown that the Deli’s automatic stop mechanism does not work with these pencils and that the harder material seems to be detrimental to the blade cylinder.

The pencils used in this blog post are Faber-Castell’s 1117 B and Uni Mitsubishi’s Arterase Color Vermilion 310. The 1117 feels like an unpainted pencil. It is not really painted but features a water-based varnish. It also has a breakage-resistant lead and an eraser. It does performs well for a budget pencil. It is made in Germany and sells for around € 0.30 each (~42¢, ~25p). You can find a review of the Faber-Castell 1117 at pencil talk. The Uni Mitsubishi’s Arterase Color Vermilion 310 is made in Japan. I do not have more information about this pencil, but you can find a review at Lexikaliker and at pencil talk. I would like to thank Lexikaliker for the Arterase Color pencil used in this blog post.