For many years there hasn’t been much going on in terms of new Caran d’Ache mechanical pencils. There is a lot of choice when it comes to ballpoint pens but there wasn’t much to look at in terms of affordable (<£50) mechanical pencils (there are unusually many in the ‘above £500’ range, though).

In recent years this changed to some extent with the 849 mechanical pencil being available in a few new colours and editions, e.g. Black Code. There are, however, not many shops here in the UK that actually stock these.

Today a new pencil joined the Caran d’Ache offering, available in a set with a ballpoint pen as a limited edition, the Set Fresher.

I am happy to see more mechanical pencils from Caran d’Ache, even though it is basically just the same pencil in different colours. I wish they’d do something else, e.g. offering a 0.5 mm version, but for now, just seeing more colours are a nice change.

Caran d’Ache seems to be starting the different colour limited editions game for their mechanical pencils and lead holders, or maybe not starting it but taking it up a notch, while Lamy is by now really good at the ‘new colour game’. Every time I think I won’t buy another Safari they come up with more good colours: last year the re-release of the original colours, this year the beautiful strawberry and cream colours, with matching clip etc.

Kaweco is also really good at this, with a mix of happy affordable colours and more posh looking ones that are slightly more expensive.

In terms of new innovation there have also been some news.

The new Kurutoga Dive is not only rotating the lead like previous versions, but is also advancing it. It is a capped and a limited edition. I wonder if the cap is there to protect the mechanism when not in use. Maybe the front is not as sturdy (in the current version) as previous Kurutogas with less complicated mechanisms. If that’s the case there might be a regular version without a cap in the future. This thought might explain why this is a limited edition: maybe they want to see first how this mechanism fares in the real world, or the manufacturing process isn’t automated enough for mass market production and some manual labour is currently involved in assembly which doesn’t make it quite mass market ready yet….

One detail is rather curious. He never experienced line variation issues with his Jetstream pens whereas I regularly experience these issues with all my five Jetstreams. This makes me think that this is not a one-off quality control issue. Instead, it might have to do with writing pressure or writing angle (The latter seems more likely, just because I assume my writing angle deviates more from the average Jetstream user than my writing pressure).

Have a look at the two ‘e’s and the ‘y’ in the example below.

Dear uni-ball, I give up.

I really tried to liked your erasable Signo TSI pens.

I first got excited about your pens in the mid to late 1990s, when you handed out free eye fine pens outside my Mensa (that’s what they call a university canteen in Germany). I liked them very much and bought more. In fact, I liked writing with them so much that I tried refilling them, so that I could have more colours and a more letters per Deutsch mark spent. Of course that didn’t go well.

When Tesco, a British supermarket chain, had a big uni-ball mixed pen pack I couldn’t resist. Part of this pack were Signo TSI pens. Two of them, green and blue, never worked properly. You get a few millimetres of ink, that’s it. All you can do is use them to carve your message with their sharp rollerball into the paper. It doesn’t matter how hard or light you press, the ink isn’t coming. The other two pens, red and black, work but the coloured lines left on the paper are quite subdued and, to be frank, ugly.

I guess I have to give up and throw them. Trying to get them to work again and again is just frustrating and a waste of time. 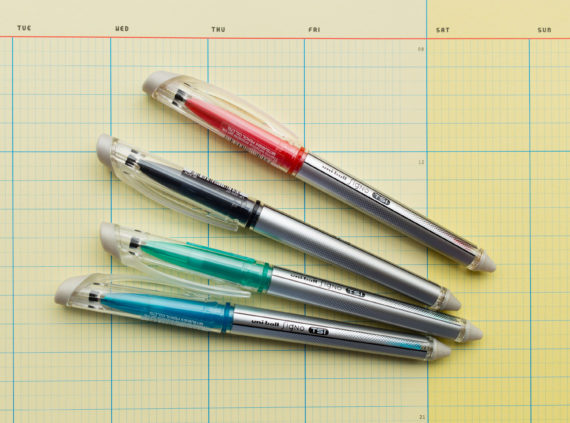 You can read more about the Signo Erasable, probably the predecessor of the TSI, in this Pen Addict blog post from 2008.

My thanks go to Yumiko for sending me these.

An unusual post for Bleistift: not pencils and not fountain pens, either.
Last week I saw the uni-ball AIR for the first time. I was in a WH Smith’s store, a chain of stationery stores in the UK. What grabbed my attention was the fact that it was being advertised as writing like a fountain pen, i.e. pressing down more should produce a wider line.

At home I then found a place where I could order them for £1.99, including postage. Unfortunately I didn’t realise that there’s a medium and a broad version of this pen. I bought the broad one by mistake.

Well, at least for the broad version the advertised flex effect isn’t very strong on most paper, have a look at my video, where I compare it to a Pelikan F nib.

The paper used in the video is Banditapple‘s new 4G paper.

The flex properties of this pen might be disappointing, but it is still a nice pen to write with.

Since I made the video I noticed that Tesco had a lot of stationery offers.

I bought a pack of 12 uni-ball pens for £12, hoping the uni-ball AIR pens would be medium, not broad (the pack wasn’t marked) and that the medium pens have more flex, but unfortunately it turned out that the AIR pens in this pack were also broad.

You can read more about this pen at Clicky Post and Office Supply Geek.