It is probably superfluous to write about the Faber-Castell 1117. Not because it is a very common pencil everybody knows about, but because this pencil is not new to the blogosphere. It has previously been reviewed at penciltalk and this isn’t its first appearance at Bleistift either: the 1117 was the supporting actor in the review of the Deli pencil sharpener 0668. So why do I write about it again? The reason is that I thought Faber-Castell stopped producing this entry level pencil – after I was unable to buy this pencil in shops that sold this specific model previously. Before you panic: Calm down, dear. The good news is that Faber-Castell confirmed that they are still making the 1117. 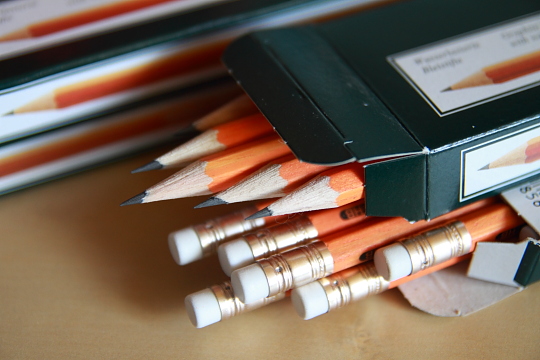 The lead of the 1117 could be better, there is not doubt about that, but in good Faber-Castell tradition it does last a long time before it wears down and needs sharpening. Once the pencil it dull or blunt it is, at least in my experience, less pleasant to write with. This is however quite normal for inexpensive pencils and only very few pencils would excel in this category. The 1117 is however usually quite smooth and there would be very few combinations of paper and pencil point state that would result in a scratchy writing experience. The lead could be darker, but this is again something we shouldn’t be surprised about as Faber-Castell measure and label the softness of the lead quite conservatively. The 1117 shows no problems with smudging when being erased erased. I would describe the eraser from the eraser-tipped version as “normal quality”. It performs a bit worse than the eraser of a Dixon Ticonderoga , is similar to the eraser of a General’s Semi-Hex, but much better than the white eraser of the Palomino Blackwing. [2]In case you wonder why I picked these two for the comparison: Those pencils were just lying on my keyboard. Thanks to Sean, Kent and Adair for these. 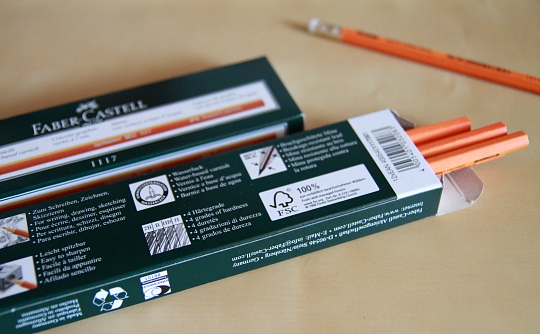 This is an extremely cheap, or better: inexpensive,  pencil and value for money is definitely excellent.  Production of the 1117 started in 1991/1992 (20th anniversary soon!). When this pencil was first introduced it was unfinished, but for hygienic reasons later versions got a protective finish. The feel is however very similar to an unfinished pencil. Depending on your perspective this means that the pencil has a great grip or it is slightly too rough and therefore uncomfortable. The version without ferrule and eraser is available in 2B, B, HB and H. I have seen the eraser-tipped version in B and HB, but according to the label on the box the eraser-tipped version is available in five grades. All versions feature SV-bonded anti-break leads.

I would like to thank Ms Schaklies from Faber-Castell for the additional information about the 1117.

The photo of Ólafur handing over a pencil to Daníel has been taken from episode 8 of the great, Icelandic comedy Næturvaktin. I believe that the use of this image falls under “fair dealing” as described by the UK Copyright service.