An unusual post for Bleistift: not pencils and not fountain pens, either.
Last week I saw the uni-ball AIR for the first time. I was in a WH Smith’s store, a chain of stationery stores in the UK. What grabbed my attention was the fact that it was being advertised as writing like a fountain pen, i.e. pressing down more should produce a wider line.

At home I then found a place where I could order them for £1.99, including postage. Unfortunately I didn’t realise that there’s a medium and a broad version of this pen. I bought the broad one by mistake.

Well, at least for the broad version the advertised flex effect isn’t very strong on most paper, have a look at my video, where I compare it to a Pelikan F nib.

The paper used in the video is Banditapple‘s new 4G paper.

The flex properties of this pen might be disappointing, but it is still a nice pen to write with.

A close up of the uni-ball AIR

Since I made the video I noticed that Tesco had a lot of stationery offers.

I bought a pack of 12 uni-ball pens for £12, hoping the uni-ball AIR pens would be medium, not broad (the pack wasn’t marked) and that the medium pens have more flex, but unfortunately it turned out that the AIR pens in this pack were also broad. 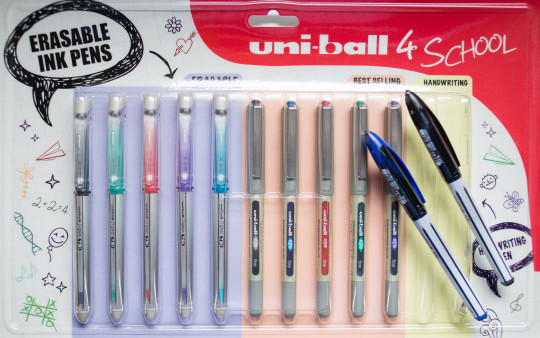 You can read more about this pen at Clicky Post and Office Supply Geek.

7 thoughts on “The uni-ball AIR and the missing flex”