I’m still not up to date in the world of stationery, so please excuse if this blog post does not include all information, but when I noticed the name Ada Lovelace in the latest Pen Addict Podcast Show Notes I had to have a look.

As you might now CalCedar is releasing themed Blackwings at regular intervals. They tend to have a number linked to the theme. This time the theme is “Ada Lovelace”, considered by many to be the first computer programmer1, and the number is 16.2. 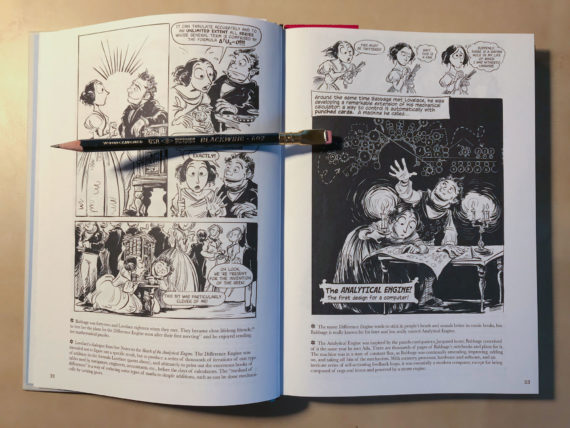 My first university degree was in Computer Science, so this theme certainly made me curious and I followed the link to Blackwing’s web site.

So what does 16.2 stand for? According to CalCedar

The number 16.2 is a nod to the Analytical Engine’s storage capacity of 16.2 kB (0.00005% the storage of the average smartphone) and the backside of each pencil bears a binary pattern stamp of Ada’s initials AAL, the same initials she used to sign her work.

My second thought: why use kB? I am not an expert in the Analytical Engine, but it was based on the decimal number system, it wasn’t binary based! The only way such a conversion would make sense would be if you wanted to compare the storage capacity to a modern machine, but it only makes sense if you want to implement the same storage capacity on a modern computer, as a simple comparison it doesn’t work because it’s not a simple as some other conversions, like converting Fahrenheit to Celsius – because of the way modern computers work there’s no 1:1 comparison.

My third thought: Where did this number come from. Ah, ok. Wikipedia says in the Analytical engine “There was to be a store (that is, a memory) capable of holding 1,000 numbers of 40 decimal digits each (ca. 16.2 kB)”2.

OK, I get it. The number is from Wikipedia.

…but the Analytical Engine was an idea, not something that was actually built at the time. Babbage himself wrote

“In the drawings I have prepared I proposed to have a thousand variables, upon each of which any number not having more than fifty figures can be placed.”3

Based on 50 digit figures, as described by Babbage in his 1864 book, the number on this pencil should be

To me, it looks like a poor Wikipedia copy and paste job, done without love or understanding of Ada Lovelace.

We need a new person-themed Blackwing. Pick a pioneer who is not a white male.

I found one on the Internet. There’s a woman who was a programmer.

Great, look at her Wikipedia page and pick a number.

The whole theme seems to have been put together without the due care and attention Ada Lovelace deserves.

Before I finish: there’s actually a quote from Ada Lovelace where she mentions pencils. You can see it on Google Books.

The comic book you can see in the picture is called The Thrilling Adventures of Lovelace and Babbage: The (Mostly) True Story of the First Computer. The edition I got is long sod out but you can still get the US version (hardcover released in 2015) or paperback ..or the UK paperback edition from 2016.

Untangling the Tale of Ada Lovelace