Kaweco’s stand was the stand most visitors would see first as it was just next to the entrance to the first hall.

They showed many of their new products. I particularly liked the red fountain pen. It is a red colour that feels like a red that has been revived from Kaweco’s past, but when I asked about this I was told that it is a new colour they came up with recently. 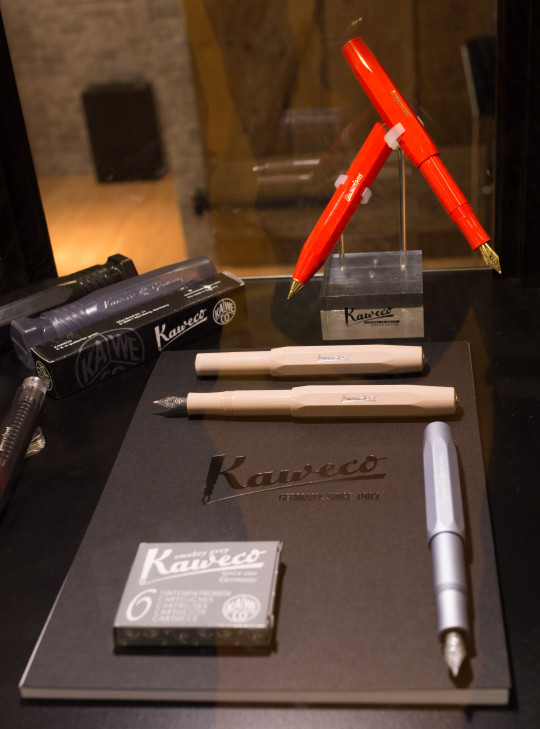 Kaweco also introduced new packaging in the form of a big plastic screw (you can see it in the back on the left, in the photo above).

The employee at the stand also told me that black is their ‘best colour, so they introduced black as part of their ICE Sport series (that’s the series of Sport pens that are half transparent)

Kaweco’s new aluminium dip pen / nib holder was also being presented at their stand. There is only one nib for now, but more will be available in the future.

What I found most exciting: They brought all the tools needed to assemble their fountain pens. I was lucky enough to have witnessed how these tools are being used and made a little video. The pen being assembled is a fountain pen that is a bit darker than the new Macciato colour. This Caramel colour is limited to 300 pieces.

The last item I want to show is their new pen holder in the shape of a German Shepard, Kaweco’s heraldic animal. The pen is made from artificial stone. I have used Pelikan’s pen holder in the shape of a pelican, but it is made of some sort of ceramic and will scratch the plastic body of Pelikan pens. From the looks of it I think the problem with scratches shouldn’t be as bad with Kaweco’s pen holder, but I haven’t really tried it out. 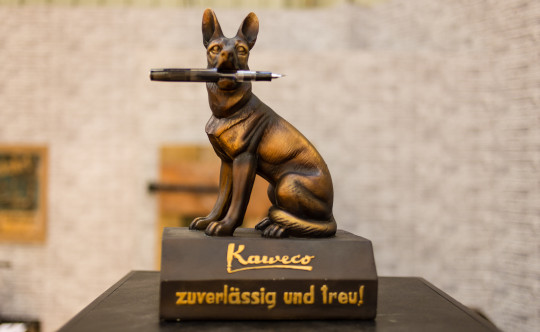 I was happy to hear that all of these items will be available in the UK.

You can find more information about Kaweco’s new products on their web site.

I found more information about the Kaweco pen holder at mostwanted-pens.com.