Today: another blog post about one of the items I have received from Office Hero, the Staedtler Wopex. You might remember my previous two blog posts about the Wopex, one was looking at the Wopex 2B and 2H and one was comparing different eco pencils. Office Hero sent me a pack of twelve Wopex as a free sample. Their normal price is £4.01 (~ $6.35; €4.60) plus VAT.

Why another blog post about the Wopex? The Wopex has one property I really like, even though there are actually also a few things wrong with the Wopex. Back to the characteristic I like, which is why I pick this pencil more and more often when making entries in my diary. The reason is simple and has been mentioned by Koralatov in a recent comment: there’s hardly any graphite transfer between different pages when writing on the reverse. I use my diary to keep track of appointments and to record things that need doing. Graphite from soft pencils will transfer easily after something has been written on the reverse or on the next page, which will in then look very unsightly. Even though you can get graphite from the Wopex to transfer to another page if you want to, as seen on the photos, this transfer is usually not happing under normal circumstance and is therefore not a problem.

I think the Wopex has great potential, but it also has a few flaws which I want to mention.

There are quite a few other issues, but mentioning them all would distract from the main issue I want to address here: Wopex‘s great lead that is a very good choice for diaries. 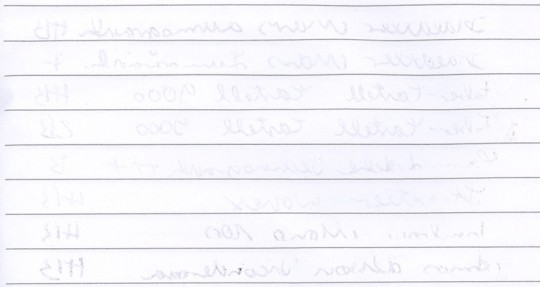 Let’s look at the results from my (unrepresentative) graphite transfer test, conducted by writing on one page, putting the next page on top and applying pressure to the reverse of the next page [1]The effects can be stronger when applying pressure directly to the reverse of the page you wrote on.. Harder and lighter leads do better than softer and darker leads – no surprise here. The best pencil in my comparison was the Staedtler Wopex HB, followed by the Caran d’Ache Technograph 777 B, which has previously been reviewed by penciltalk. The worst pencils in this test were the Tombow Mono 100 HB and the Amos Dixon Ticonderoga HB. This was obviously due to their softness which does however bring other advantages, e.g. better pressure/darkness ratio – I do however prefer a tidy diary and do tend to use the Tombow and Dixon only when smearing, smudging and graphite transfer don’t matter.

The comparison has been conducted in a Castelli Academic Diary my wife got from her employer. I use a no name  academic diary from my employer, which has very different paper. My initial impressions are that graphite-transer-wise good pencils behave better in my diary, but bad pencils behave worse.