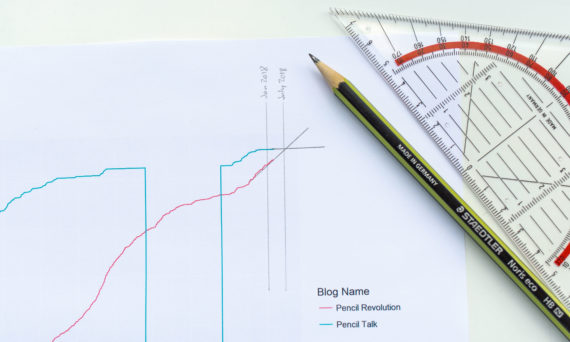 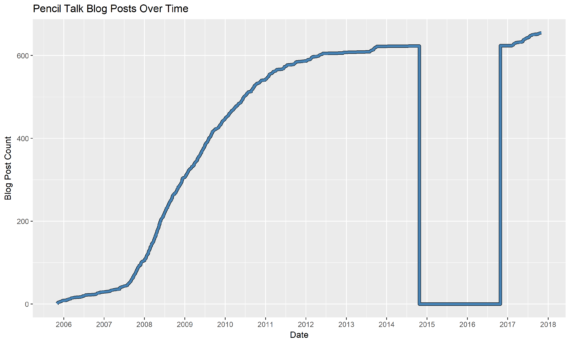 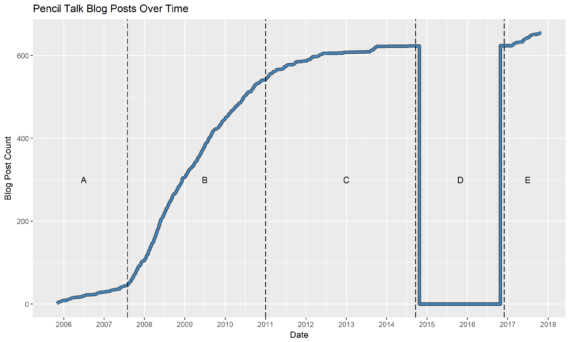 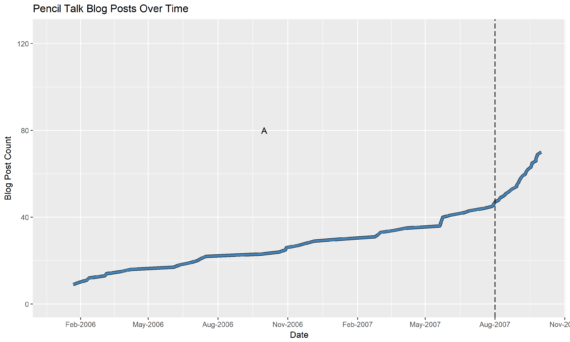 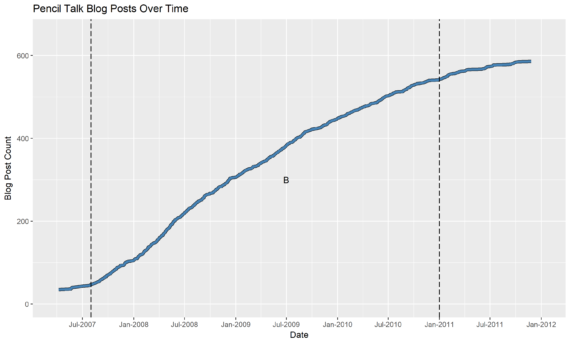 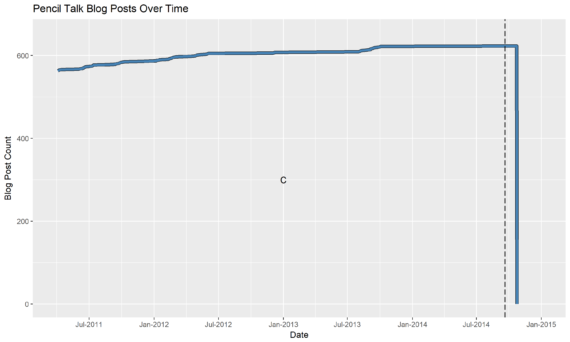 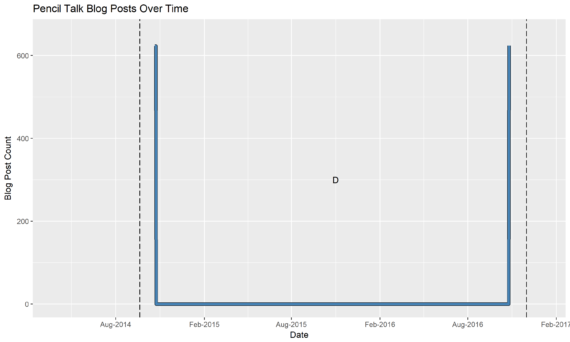 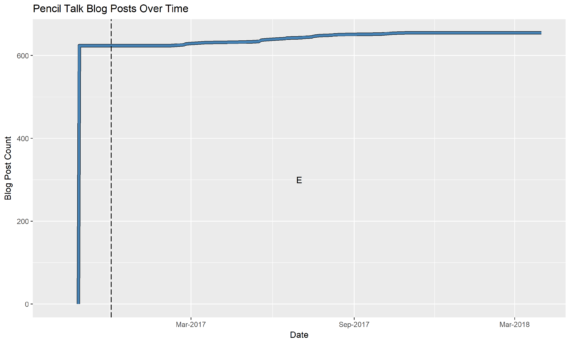 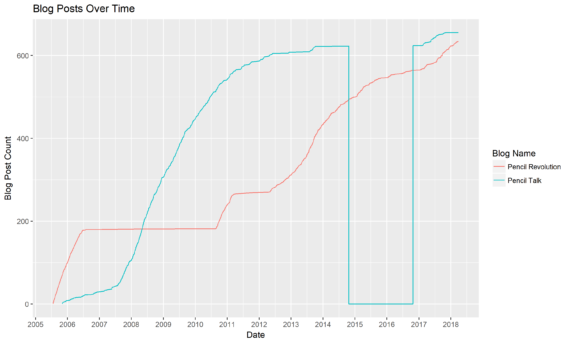 All the blogs so far: Posts over Time for Pencil Revolution and Pencil Talk

Work is keeping me busy, so there haven’t been many blog posts recently. To prove that I’m still alive here’s just a quick add-on to my first blog post in my Pencil Blog Series.

Let’s have a quick look at the word count1 of Pencil Revolution blog posts over time.

The longest Pencil Revolution blog post had nearly 2500 words. The shortest blog posts didn’t have any words and just consisted of a picture. 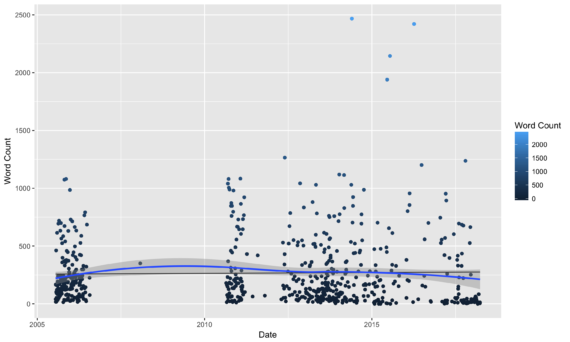 The black line is a straight linear regression line. The blue curve is a LOESS (local regression) curve, which is a bit more ‘flexible’ than the straight line. You can see that in the first years, posts got longer and longer, while in recent years posts got shorter and shorter.

Looking at the cumulative word count we see that all Pencil Revolution blog posts together reached a word count of nearly 170,000 by now. 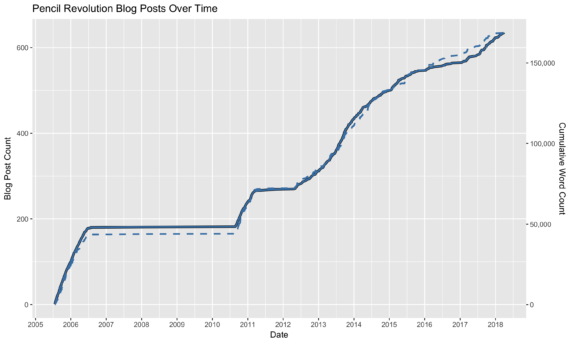 That’s it for now like I said – just a quick blog post to show I’m still here. I hope to post more once work is less busy.

No, I’m not talking about the song by Schradinova.

I’m talking about Johnny’s pencil blog – because this is another one of those R / statistics blog posts – as threatened previously. I actually started to work on this in 2015. Originally I wanted to present all the data in one blog post, but because there are old pencil blogs disappearing and new ones appearing regularly this somehow hasn’t worked out yet.

That’s why I’ve now decided to switch to looking at the pencil blogs one by one, always adding to the previous stats and since I haven’t yet figured out a better way of ordering them I decided to start chronologically. The thing is, though, if pencil shops have been around for decades, there may be older pencil blogs I’m not aware of. If you know of any pencil blogs please let me know in the comments, so that I can add it to my list of blogs to be covered. At the moment I have around 30 pencil blogs on my list. Some of the next blogs to be covered will be Pencil Talk, Dave’s Mechanical Pencils and Lexikaliker.

I decided to stick with pencil related blogs, but if there is any interest (usually there isn’t much interest in the statistics related blog posts here) I’m happy to expand to more general stationery blogs.

Also, if the blog owner contacts me to object I will take the blog post about their blog offline, so there is a chance that these stats posts won’t stay.

So far there have been 635 blog posts on Pencil Revolution. Congratulations! 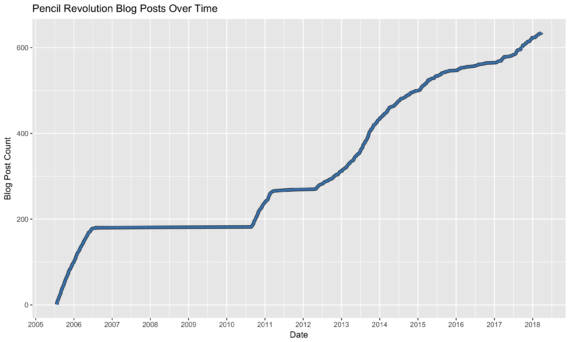 The plot above shows the blog posts over time. Horizontal lines are an indication for periods of inactivity while ‘more vertical’ lines show periods with many blog posts. In the case of Pencil Revolution, you can see that Johnny stopped revolutionising between the Summer of 2006 and the Summer 2010 and between Spring 2011 and Spring 2012 before picking up again. The latest spurt started in the Summer of 2017. I won’t comment further as the graph is fairly straightforward.

Congratulations on more than ten years and more than 600 blog posts. 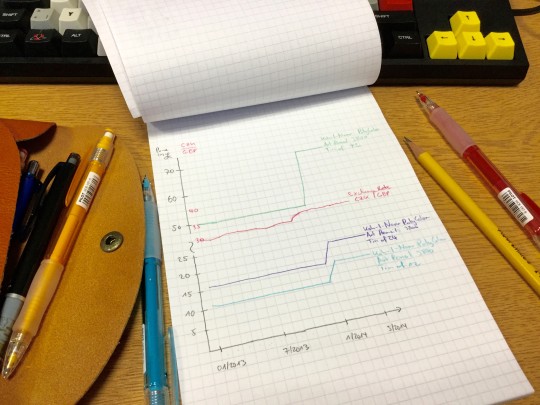