My previous blog post, looking at Tiger’s Blackwing, seems to have made some people upset.

It might be worth to walk a few steps back and to get an overview of the points I tried to raise.

If the new Blackwing would use the same lead recipe or was made in the same factory I would see that as ‘strong continuity’. If the name was bought from Faber-Castell I could see that there is some continuity, but the Blackwing stopped being made, the name ‘expired’, someone unrelated grabbed the name. These are just facts – Don’t shoot the messenger.

I’m writing with pencils, I’m not an artist as you might have noticed from the low quality of the occasional drawings you can find here. I also write very small, so need a fine point. People use pencils in different ways, so for you a 4B like pencil might just be the thing you need. Everyone’s mileage varies. The Palomino Blackwing might be great for some, but I spelled out why I prefer the Tiger. Put the Tiger in your hand! (was: put the tiger in your tank).

There were some questions about the ferrule, asked by Gunther and on social media. When those questions where asked I made a little video instead of writing it up, just because talking to a microphone is so much faster and more convenient than writing a blog post and my blog is still in hibernation mode because of a lack of time. I thought I link to the video here, in case you want to compare the ferrule to your own ferrule. 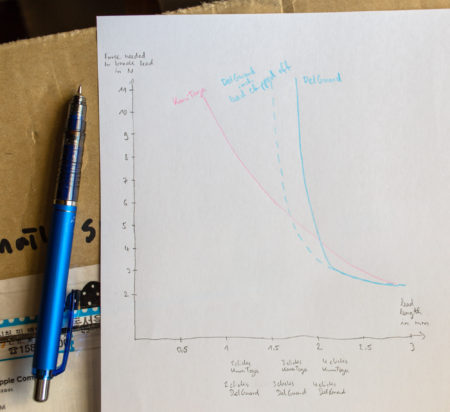 If you are looking for a cheaper alternative to the CalCedar Blackwing, why not try a Staedtler Mars Lumograph 3B. It’s great! ..but don’t take my word for it, look at Pearson Moore’s comparison instead. The man who spent some 1,200 hours collecting and categorising data point for different pencils. I first heard about his book from Gunther.

If you remember my DelGuard blog post you know I’m into this kind of stuff. Unfortunately that blog post only got one comment, so I assume this topic is not of interest to readers of my blog. but if you are one of the rare ones who likes this kind of stuff have a look at Pearson Moore’s book: Pearson’s Graphite 2015 ($19.95 in the USA, £13.95 in the UK)

Here are some of the attributes of the two pencils that are most important to me.

The have the same darkness, but the Staedtler keeps the point longer as it is less soft. Lissance, i.e. smoothness is higher for the Staedtler. That’s a win win for the humble blue pencil. The Palomino does score higher in some other areas like Pressure Insensitivity, but they are not important to me. Pearson Moore checked pencils between 30 mN and 1N. I guess if you are an artist this might be of interest, especially if you only have one pencil you need to do all your shading with, but again this is not the case for me.

If you love the Palomino Blackwing please let me know what you think of the Mars Lumograph in 3B.