As done in in previous recent anniversary posts here’s a quick behind the scenes look and some of my thoughts about the blog.

This time I will mainly focus on Bleistift’s YouTube videos [1]which have 23 YouTube subscribers by now, in case you wonder about the title of this blog post., the first one which first appeared just a bit more than a year ago, in September 2015.

The videos are easy in a sense that they don’t require as much background work as blog posts, but the video image quality isn’t very good, mainly because of the lack of space in our home and the lack of light (because the windows are quite small). I could set it up nicely somewhere on the floor in a corner, with some lights, but there’s usually not enough time for that. Blog posts on the other hand can be started and interrupted as often as I like, because there is no set up time, so it’s easier to find a few minutes here and there to work on a blog post. Plus you don’t notice our kid making noise in the background. Something you do notice this in the videos.

No wonder there’s no space in our home, have a look at new home sizes around the world [2]Figures taken from The Telegraph and ShrinkThatFootprint.

Both issues, size and light, apply equally to taking photos, but with photos you can compensate for the poor light by exposing longer and the lack of space isn’t too bad as you can just put things on the window sill for close ups etc.

I hope to improve the quality of future videos. You might have noticed that for the last video (sharpening with a hard disk) I was wearing a coat. That was because I did that vide in the garage. Don’t expect too much though, for the foreseeable future there won’t be enough time to set the videos up nicely.

The most disliked Bleistift video so far: The Kuru Toga video

It seems as if the Kuru Toga is are always a source of controversy. The idea of rotating the lead wasn’t new, see Schmidt’s patent, and the implementation, i.e. Kuru Toga’s mechanism, doesn’t work for me, probably because I don’t use enough pressure when writing. This blog presents my personal opinion, but some people seem to get upset if you say that this pen doesn’t work for everyone as advertised. 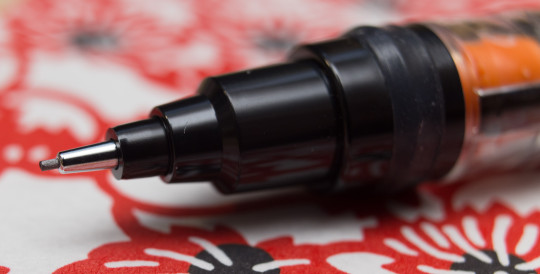 Keeping this in mind it’s no wonder that my Kuru Toga video has twice as many dislikes as likes (2 dislikes, 1 like).

Well, I am sure it’s great if you write Kanjis, but they are officially selling the pen in the West, I am not importing a pen not to be sold in the west, so I think it’s only fair to point this out and to show what leads to the pen not performing as advertised. I’m not saying it’s a bad pen, I’m just disappointed that it doesn’t work for me. I don’t doubt it works well for others (unlike the uni-ball air. I have three of the broad type now, but with the best will: the uni-ball air doesn’t do what it’s supposed to do).

The most popular video: Refilling pencils? Why??

I also don’t get why some videos are popular while others aren’t.

The DelGuard pen force test, the first video and therefore online for the longest time, is not very popular (about 11 views per week overall), even though I find this test exciting. Also: getting the force to display correctly and in sync with the video wasn’t easy. I think the idea was good and the fact that a few weeks after my video Zebra, the company behind the DelGuard, made a Japanese video with similar elements shows that it’s useful in conveying how the pen works.

I guess I shouldn’t be surprised about the lack of interest though, because the blog post about the DelGuard only got one comment, despite the effort that went into trying to produce an accurate diagram that shows how much pressure can be applied before the lead breaks when extended how far. 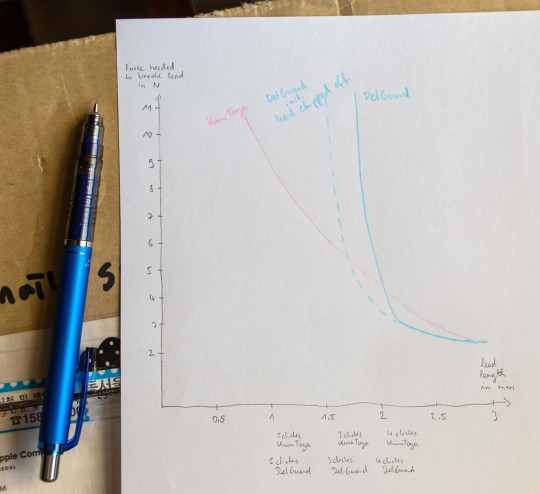 How much force is needed to break a lead extended a certain length in the DelGuard.

In comparison the refilling a mechanical pencil video is quite meaningless, but is much more popular (about 35 views per week overall).

The lesson here is that my audience doesn’t like complicated stuff. No point in writing things down that no one wants to read anyway. You might have noticed that I am now trying to keep blog posts simple. It doesn’t always work as blog posts tend to end up more complicated than first planned – but I’m working on it.

Something else I noticed is that since I started seven years ago there are more and more companies that want their products being advertised by bloggers, but they don’t provide a sample (so small bloggers are supposed to basically just relay a marketing message for a product you don’t know).
I have linked to many Kickstarter projects I found interesting, even though I didn’t get anything free from these campaigns, on the contrary I spent money to buy/back the product. Bloggers do that because they get excited about these products. What has changed is that now companies just sent you their press releases without any additional information. Unlike them I don’t earn money from this, it costs me money, like it does for many other non-commercial blogs. I do get some benefits from this blog: The two most expensive things I got in these seven years was (Number 1) being invited to Insights X followed by (Number 2) a Lamy 2000 mechanical pencil, worth £46 (~$57; €53). I guess you could count these ‘benefits’ against he cost of the server, but there still wouldn’t be any money left.
Because of the non-commercial nature of this blog I am quite unhappy when companies misuse non-commercial blogs, e.g. like Book Block did. I found the idea great so there was no need to promise me anything to get me to post about it, so why tell me they’ll send a notebook and make me design it when they won’t send it, even after repeated email exchanges about this? This is even more frustrating as they did send samples to the big blogs, like Desk of Adam, Gentleman Stationer, Pentorium, Woodclinched (I think Andy said he got one), but small blogs get like mine get told they’ll send a sample, but then they can’t be bothered to keep their word.

Well, a while ago Paper Oh told me on Instagram they want to send me a notebook. Let’s see what will happen.

I know many other examples that shall not be named where other companies use bloggers not only for input, but to do important tasks that are part of product development or creation and after the work is done the bloggers then get ignored or don’t even get to see the final product, even though it is sold for a cheap price, i.e. is available. I have not been treated like this, but it is a shame that the small bloggers sometimes do get misused in this way.

It didn’t used to be like this and it is a shame that it is like this now.

Well, since this is an anniversary post there’s also a giveaway.

…and the best things is that I don’t make you follow me on Facebook, Instagram or Twitter and don’t make you write a poem either. All you need to do is post a comment here. The giveaway will be open for one week, until Monday, 28 November 2016, 23:59:59 Zulu time (GMT). If you don’t know what to write, just write “I would like to win” or something like that…

42 thoughts on “Seven years, 23 YouTube subscribers and a giveaway”