I have been recently contacted by Anna from The Pen Company who asked me whether I would like to review a pen from their shop. In the end James from The Pen Company was kind enough to not only to send one, but two pens I had picked: the Parquet Ivory fountain pen and the Parquet Ivory mechanical pencil from Faber-Castell’s E-Motion line. I was also able to try Faber-Castell’s wooden Castell 9000 style 4GB USB stick out. As part of a promotion you get one of these USB sticks with orders of all Faber-Castell pens while stocks last.

Both pens come with an ivory coloured “precious resin” barrel. The parquet pattern on the barrel has been produced using laser etching, a technique often used for keyboards. There is a tiny burr visible on the barrel if you look hard. This burr is slightly more pronounced on my fountain pen, but it is really small. Most people wouldn’t even notice it. 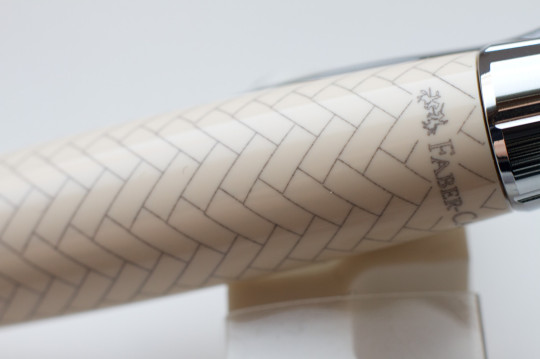 The mechanical pencil accepts 1.4mm pencil leads and comes with B leads. Size-wise these are between Yard-O-Led leads and the leads used in leadholders. I assume that unlike leadholder leads, which are usually sharpened, the Faber-Castell leads are not supposed to be sharpened, as I haven’t seen a dedicated lead sharpener from Faber-Castell. My handwriting is very small, which means that even if I frequently rotate the pen the lines get too wide and I have to starting writing bigger letters – but the lead size might be just right for someone with a bigger handwriting.

The eraser under the cap

To propel the lead you have to turn the cap clockwise. Similarly you can get the lead back into the body of the pen, e.g. when putting the pen in a pencil case, by turning the cap anticlockwise. This is different to twist-based mechanisms where turning will unlock and advance the lead. The E-Motion‘s lead stays ‘locked’ all the time.

There is also an eraser under the cap. As expected for the big size of the pen’s body this eraser is bigger than what you usually find in mechanical pencils.

The lead storage under the grip

When you unscrew the cap you can find a storage area on the side of the body that should be able to hold six to eight replacement leads. Unfortunately I couldn’t try out how many exactly will fit as I didn’t have enough leads of this size.

A very nice pencil. The spring-type clip is very nice. There is a big eraser for emergencies and the pen can hold several spare leads despite the big diameter of the leads. If normal pencils are to thin or light for you this might be a great alternative, as long as you don’t mind the width of the lead.

The fountain pen comes with a big and heavy screw cap, that has a nice spring-type clip, like the one found on the pencil. The nib is stainless steel, available in F, M and B. I chose the F nib as it fits best with my handwriting. The pen accepts standard cartridges and comes with a converter. 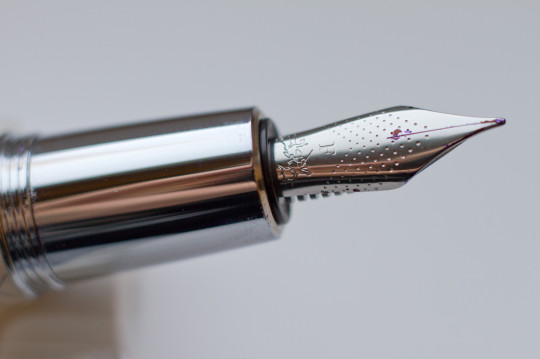 The laser-etched Parquet pattern on the fountain pen. There is no etched logo. The logo is embossed on the cap.

The nib and its performance on paper

The bleed through of the E-Motion compared to that of a Lamy Safari, here on Silvine paper.

The nib is nice and smooth and writes well on all types of paper. I found that the writing experience is above average on really poor paper. When it comes to average paper performance is good, but not as good as some other fountain pens. I used the E-Motion with Diamine’s Sapphire ink, a very well behaved ink. On average quality paper, in this case a Yokrshire-made exercise book from Silvine, there is no feathering at all – but there is some bleed through: it’s much less than the bleed though you get with a wet Noodler’s Konrad, a bit more than with a Pelikan M215 EF and more than with a Lamy Safari F, which doesn’t produce any bleed through at all. The bleed through issue be easily fixed by using different paper or by trying to make the nib drier [1]Instructions how to do this can be found on the Internet..

When freshly uncapped I never had any problems with skipping, unlike my experience with some other, more expensive fountain pens, like the Cross Century II. The cap-off time time of the E-Motion is however shorter than some other fountain pens. Left uncapped it tends to dry and start to skip when starting to write again after two minutes non-use, which might be a problem when taking notes in a meeting or in some other situations (classroom, writing comments, …) [2]This is obviously dependent on temperature, humidity, etc. – but as a comparison: in the same conditions a Lamy Safari can be left uncapped for 5 minutes or longer without any skipping when … Continue reading. 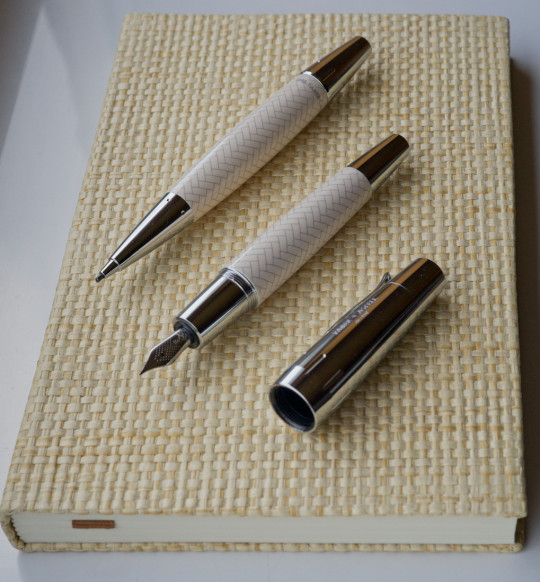 I was very happy that Anna and James from The Pen Company sent me these pens, but it’s time for the two pens to find a new home. For a chance to win the the mechanical pencil or the fountain pen please leave a comment at this blog post, telling me which type of pen you normally prefer (pencil, mechanical pencil, fountain pen, roller ball, ballpoint pen or whatever it may be). It would be nice if you explain why you prefer that type of pen, but that’s not necessary to be eligible to win. If your favourite type of pen is not the one you want to win, e.g. you might prefer pencils, but you’d like to try a fountain pen for a change, please state that in the comment, too.

I am happy to ship to any country as long as Royal Mail is delivering to that country. The UK’s National Stationery Week runs from 22 – 28 April, so the closing date for the giveaway will be 28 April 23:59:59 BST. To determine the winner I will go to random.org and will get a random number. The corresponding comment will win the pen of choice (either pencil or fountain pen) unless it’s a comment from me or it’s obviously spam (think ‘cheap Rolex’ ads) …in which case I will get a new random numbers until there is a winner. I will then get another random number to determine the winner of the other pen. Similar rules: the corresponding comment will win if the pen left is their pen of choice – unless it’s a comment from me, a comment from the first winner or it’s obviously spam. I will draw new random numbers until there is a winner. As long as you write meaningful comments, e.g. as part of a ‘discussion’, you can leave more than one comment and the comments will not be counted as spam.

If you want to win an even better pen: as part of The Pen Company’s Spring Poetry Competition you can even win a Graf von Faber-Castell Guilloche Fountain Pen in a choice of colours.

I’d like to thank Anna and James from The Pen Company for giving me a chance to try these pens out.

You can find a review of another Faber-Castell E-Motion pencil at Dave’s Mechnical Pencils.

You can find reviews of other Faber-Castell E-Motion fountain pens at Fountain Pen Geeks and From the Pen Cup.