I like a bargain. That means I do sometimes buy things if they are cheap, even if I don’t need them.

In this case I’m talking about erasers. You never know when a good eraser might come in handy1.

There were lots of different packs, each with four erasers each, but all the packs had a different mix.

Price and exchange rates: May 2015 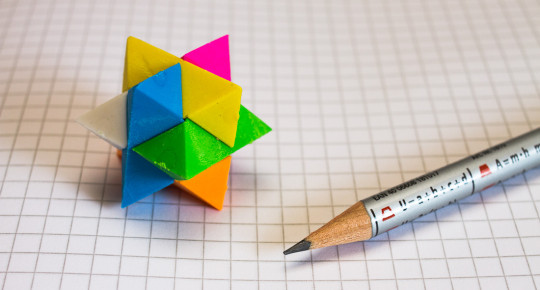 This weekend, I discovered a rather interesting eraser in Morrisons (a supermarket chain from the North of England): it’s an eraser that’s made of different smaller erasers, a bit like the Ty/iwako erasers, but it also provides many different corners, a bit like the Kokuyo eraser. The biggest surprise is the price: when I saw it on the shelf I assumed this was the novelty eraser for 50p (~81¢; 59c), but it turned out that this eraser is the Pick and Mix Puzzle Eraser, which is only 8p (~13¢; 9c). 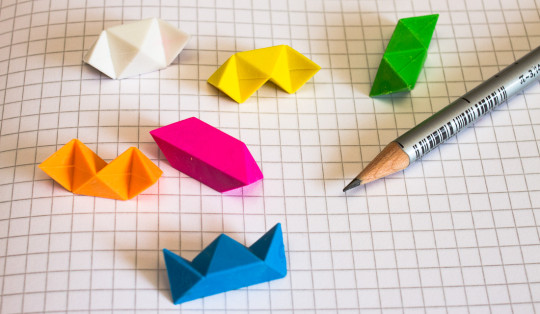 How to assemble this one again…?

The design reminds me of wooden puzzles from MENSA that some UK supermarkets sold last December.

It does erase rather well.

Performance is good to very good, especially when keeping the price in mind. The puzzle doesn’t fall apart after erasing a few words. Even though the puzzle parts might loosen up a bit you can put them back together – and even if they fell apart: you could see that either 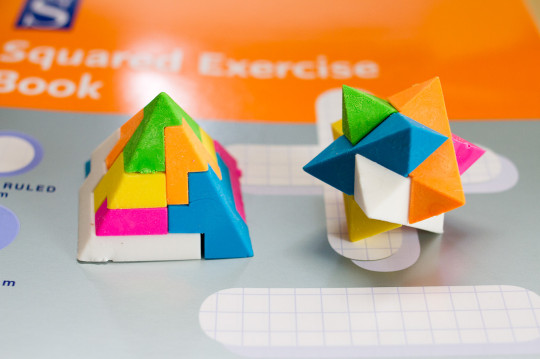 Both versions, here on a WH Smith Squared Exercise Book.

The pencil in the pictures is Staedtler’s 1810. 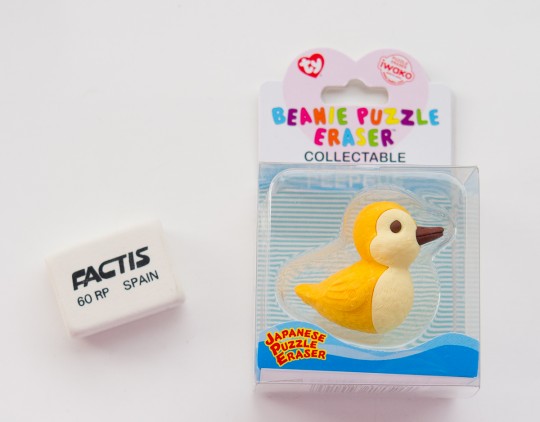 The Factis 60 RP and the Ty Peepers (unboxed)

Post offices in the UK sell all sorts of things and the things they sell are often quite reasonably priced. This can include things like cakes, hand bags or kitchen foil, but naturally there is also a selection of stationery available. In July I bought the Factis 60 RP eraser at the Cinnamon Hill post office in Walton-le-Dale for 25p (~39¢; 32c). I have seen Factis erasers in Germany, too1. It is often not possible to identify the manufacturer of these erasers, but I assume many of them are made by Factis. I assume the company is named after one of the components needed to make natural rubber erasers.

Another eraser I bought in July is the Ty Beanie Puzzle Eraser Peepers. When I saw a selection of the Beanie Puzzle Erasers on the MS Pride of Rotterdam I remembered Shangching’s positive review and bought one for £1.19 (~$1.87; €1.50). There were many erasers to choose from, so I picked Peepers, the duck, one of the erasers with a more complex looking surface structure. 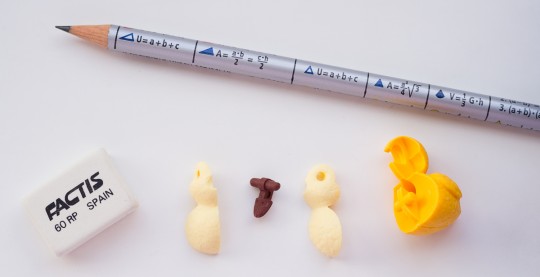 The Factis 60 RP and the Ty Peepers taken apart

Performance-wise both erasers perform similarly well, with the more rubbery 60 RP needing a little bit less effort to eraser graphite than the Peepers. Both erasers perform worse than a good eraser, like my favourite non-dust erasers or the Mars plastic stick 528 55, but better than the typical non-name eraser or the most erasers you’ll find at the end of an eraser-tipped pencil.

Comparison of the Factis 60 RP and the Ty Peepers

You can find out more about Factis on the Eraser World web site.

I bought the Staedtler pencil with the mathematical formulas, the 1810 KP72, used in the photos and for the comparison in Nuremberg’s Staedtler Welt for 95 cents (~$1.18; 75p).