I tried to get hold of an Atoma notebook for a while now. Atoma notebooks are quite common in Belgium where they were first produced in 1948. Despite their popularity in their home country they are not very well known outside Belgium, not even in the neighbouring countries. I haven’t seen them in shops in the UK or Germany and some Dutch friends I asked haven’t seen them in the Netherlands either. No wonder: 80% of more than a million notebooks produced every year stay in Belgium. The company behind Atoma did not extend their patent when it expired in the Nineties, so copies are now available from many companies: There’s Levenger’s Circa, Aurora’s Adoc, Clairefontaine’s Clairing, Elba’s Vario-Zipp, Staples’ Arc and there’s Rollabind.

How do they work

The pages of the Atoma notebooks are being held together by plastic discs. The discs are holding the sheets of paper through special Atoma shaped ‘holes’ [1]They aren’t really holes, but I’m not sure what to call them so that it’s obvious what they are.. You can remove sheets from the notebooks or swap the sheets around, just like you can in a ring binder. One advantage of this system over a ring binder is that the notebook can be folded over. Another advantage is that an Atoma notebook, compared to a ring binder, is using less space because you don’t need the surrounding folder. The ring binder will also take away space even if empty [2]By the way, the ring binder and the hole puncher were invented in 1886 by Soennecken, a company previously mentioned in this blog.. One disadvantage of the Atoma system is that you cannot label the spine of a notebook.

Where to get them from

There are two shops in the UK selling Atoma notebooks: Craft & Party Direct and Manufactum, but I didn’t order my Atoma notebook from either of them. Craft & Party Direct charge a lot for shipping  and Koralatov and Iain pointed out that they had bad experiences when ordering from this company in the past. Manufactum charge too much for shipping, too, and they have a ridiculous conversion rate for their UK prices, charging UK customers 35% more than for exactly the same product from their other online shops – that is on top of their expensive prices in the first place. Manufactum’s other online shops in Europe are set up in such a way that UK customers cannot order from them – very annoying. This plus other bad experiences [3]Delivered item not as described, security issues with their web site, … with them made me avoid Manufactum in this case. In the end I ordered my Atoma notebooks from the International School of Brussels (Link updated). The notebooks were only €2.50 (~ $3.07; £1.96) each and shipping to the UK was free, so I only paid €5 for the two notebooks I ordered. The same order with Craft & Party Direct would have cost me £10.45 (~ $16.40; €13.35), five times as much. Manufactum’s Atoma notebooks are made of more expensive materials, so a direct price comparison wouldn’t make sense. I also bought one of M by Staples’ Arc notebooks in my local Staples [4]I’ll refer to it as ‘Staples’ from now on, not as ‘M by Staples’. With a price tag of £5 (~ $7.85; €6.39) it was more than twice as expensive as an Atoma notebook. 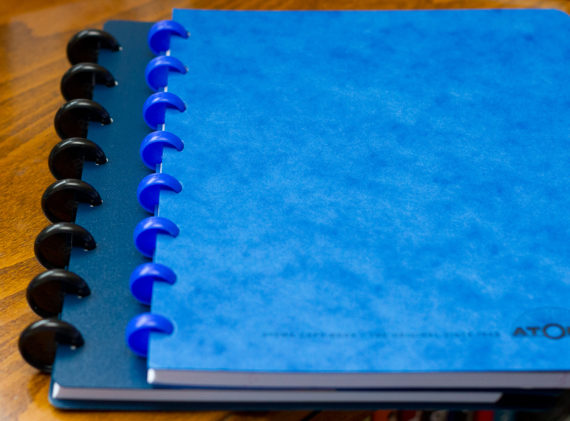 The discs: Atoma in blue, Arc in black

The A5 Arc notepad is made in China and came with 60 ruled sheets of 100g/m2 paper. I like the fact that it came with a name/index sheet, but I am not keen on the white border on each page.

There is a lot of choice when it comes to covers and cover material, for both, Atoma and Arc. The cover of the Atoma notebook I bought is made of cardboard, while the Arc cover is made of polypropylene.

The rings of the Arc notebook are bigger, which means they will probably be able to hold more sheets of paper, but that also makes the notebook bigger, even if you don’t use too many sheets of paper. Aesthetically I find the Atoma ring size nicer and more suitable for the number of sheets of paper these notebooks come with. 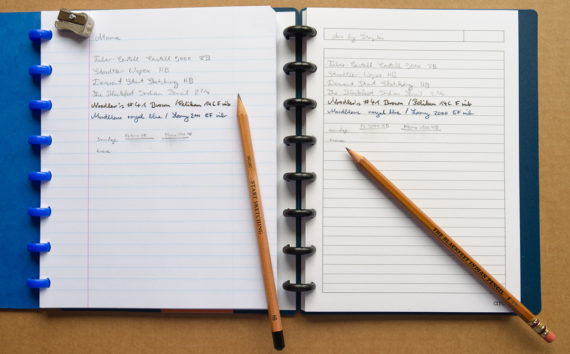 Both notepad are nice. I like the disc binding mechanism as it has several advantages over ring binders. If I had to choose between the Atoma and the Arc I’d go for the Atoma notebook. Not because it’s cheaper, but partly because I am not a big fan of polypropylene covers and prefer the Atoma’s cardboard cover. I also prefer the size and therefore look of the Atoma’s discs. Paper-wise the Arc’s paper seems to be better quality than the Atoma’s paper, but I haven’t used it long enough to be sure. My last reason for preferring the Atoma is that I prefer sheets without such a big white border.

I would like to thank Sean for the Blackfeet Indian Pencil seen on the last photo.