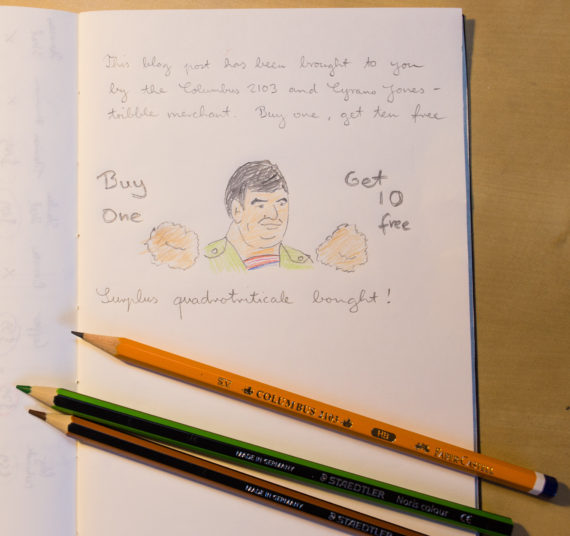 Today: Faber-Castell’s Columbus pencil, which you might remember from Contrapuntalism’s blog post about the Columbus’ catalogue number.

Last October [1]A fitting month to buy a Columbus pencil. I bought a dozen Columbus in HB for £6.98 including postage from eBay (~$10.10; €9). I like pencils with a theme, and with the Columbus theme and the little ship printed on the pen this pencil doesn’t disappoint [2]…but using the article bumber 1492 instead of 2103 would make it even better.

The Columbus did have many different article numbers since it was first released. It’s current number is 2103 (the six digit number is 113100) and even though it survived it is only officially available in Ireland where it is actually distributed by Tom Martin and Company Limited, the Irish agents for Faber-Castell, not by Faber-Castell directly. 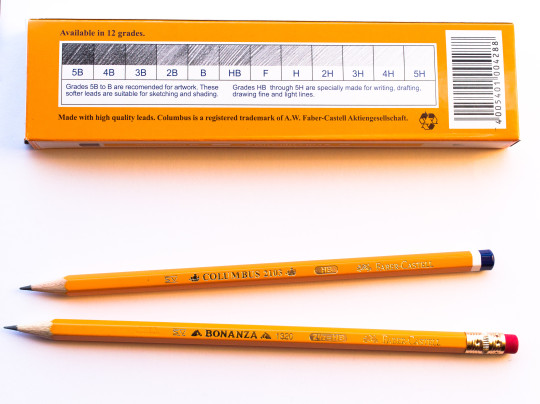 In its life the Columbus has been made in many different places: the USA, Ireland, Franconia (Bavaria). I am not sure where the current Columbus is made, the box and the pencil don’t have a “Made in” imprint, but if I was a betting man I would say they’re from Indonesia, where the Bonanza and the Goldfaber are being made.

The packaging features an EcoPencil sign, something Faber-Castell is using to highlight some of their environmentally friendly pencils, but there doesn’t seem to be a definite criteria needed to get this Faber-Castell stamp of eco approval. Some Brazilian pencils with this stamp are FSC certified, but the Columbus isn’t . Instead the Columbus has PEFC certification (Programme for the Endorsement of Forest Certification schemes). Another  reason why the Columbus got the EcoPencil sign is its more eco friendly varnish.

The Columbus delivers solid performance, as expected from Faber-Castell. The line is very similar to what you would get from a Bonanza and from a Goldfaber. This pencil is nice and pleasant to write with. Like many Faber-Castell pencils it feels a bit harder and lighter than the same grade from other manufacturers like Staedtler, so depending on your taste you might want to buy this pencils in a slightly softer grade. 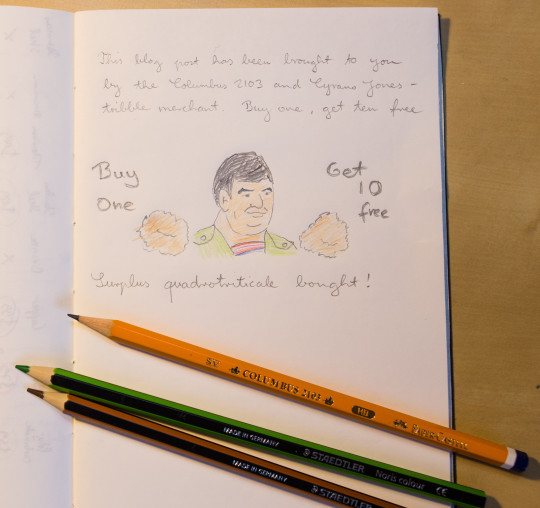 I’d like to thank Róisín Fleming from Tom Martin and Company Limited for the information about the EcoPencil label.

I believe that the use of the image from from the Irish Examiner, shown in this blog post, falls under “fair dealing” as described by the UK Copyright service.