Arnie, the guy behind Banditapple, just sent me a message telling me that he wants more people around the world to write at least once on his Banditapple Carnets – so he is currently giving away free samples worldwide to anyone who requests them – for a $3 postage contribution.

If you want to request a sample (limited time only) please fill in this request form. 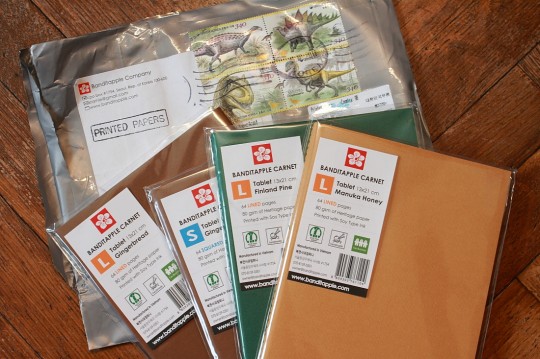 In a previous blog post from 2010 I had a look at Banditapple’s notebooks (carnets). What happened since then? Banditapple released a few limited edition carnets. Another interesting development is that the manufacturing process of the next generation of Banditapple carnets uses less chlorine while VOCs were reduced, too … and the new version of these notebooks is out. The current generation (2G) of notebooks is available in three colours: Gingerbread, Manuka Honey and Finland Pine.

Since I’ve been very happy with the 1G carnets and use them regularly at work I asked Arnie, the man behind Banditapple, whether I can order a few of the 2G carnets directly from him as he does not have an online shop yet. To cut a long story short, in the end he send me four of the new notebooks and I only had to pay the postage (€5, ~$6.65; £4.20). The package he sent to me last year only took a few days to arrive, but unfortunately it wasn’t treated very well by one of the postal services involved. Luckily, after storing the maltreated 2G carnets under some heavy books, they were (nearly) back in shape. I specifically asked for the tablet sized notebooks as I find this to be the most suitable size for daily use, at least for my purposes.

The new notebooks are still sewn, not stapled and the cover is still made from coloured paper, something I like very much as this enables me to label the notebooks using a white pencil [1]Like the Faber-Castell Goldfaber Heft&Tafel 1133 or the Eberhard Faber 1410 in white.. The paper quality of the 2G carnets is possibly even better than the quality of the previous generation. It copes very well with ink and I cannot think of a paper that is better in terms of erasing graphite without leaving traces.

A great, but difficult to get notebook.

Paperandco, an online shop from Paris still has a few of the 1G carnets in Hanoi Red and Saigon Black in stock.

The official Banditapple website and blog can be found here.

This previous Bleistift blog post has more information about the 1G carnets.

You can find a review of the 2G carnets at Okami Whatever.

I would like to thank Arnie Kim for the Banditapple 2G carnets. 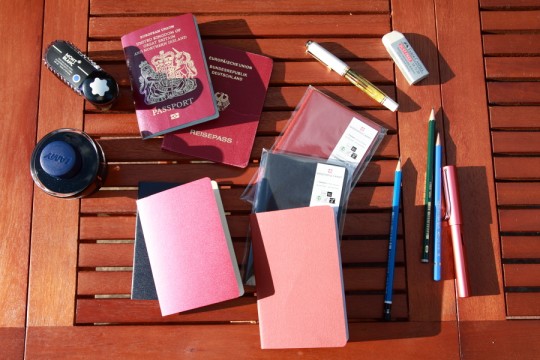 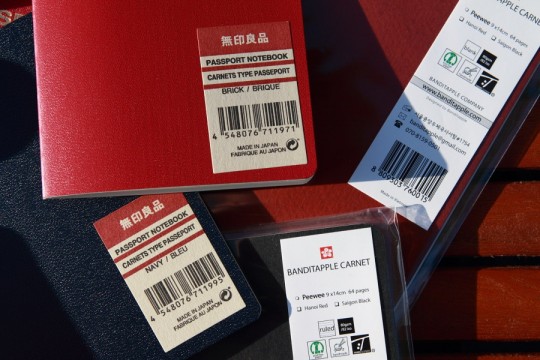