Today: TV series and pop culture themed pencils. You might have previously seen them at BoingBoing.

These are actually Chambers pencils that are hand stamped in Glasgow using hot foil stamping. The pencils I have received had the quotes written in gold coloured, upper case characters. I assume all Popcult pencils are like that, with the colour of the body and the quote itself being the main difference between different sets.

Chambers is an English company that started in 1913 and then, 99 years ago, became F.Chambers & Co Ltd. As far as I know they now belong to Italy’s Fila and have stopped producing pencils in the UK. The Chambers pencils used by La La Land, the people behind the Popcult pencils, are made in Thailand.

Many of the eraser tipped pencils have themes from TV series or movies. The level of accuracy varies. While Star Wars gets proper quotes, including “No, I am your father” instead of “Luke, I am your father”, Star Trek has to suffer the ‘fake’ quote “Beam me up Scotty” – but that doesn’t really matter, I guess.

In March I bought the “Star Trek pack of 3 blue stamped pencils” and the “Breaking Bad pack of 3 green stamped pencils” for £3.50 each plus £2 shipping, so £9 (~$15.20; €11) in total for six pencils. Unfortunately I didn’t realise that the colour in the article description is not linked to the colour of the actual product. I ended up getting the same colour for both, Breaking Bad and Star Trek pencils (meth blue / TOS Science blue), instead of the expected colours as seen on their web site. I was told that  there is a disclaimer on the etsy shop page that states that colour may vary as they sometimes run out of certain colours, but I didn’t notice the disclaimer when ordering and my personal opinion is that it might be better to remove the colour from the product description and to make the disclaimer more obvious.

The pencils do perform surprisingly well. For my taste point retention could be better, but reading other blogs I get the impression that generally point retention is not a big issue for most pencil users. If you are happy to use a B or even a 2B pencil you certainly shouldn’t have any issues with these pencils’ point retention. 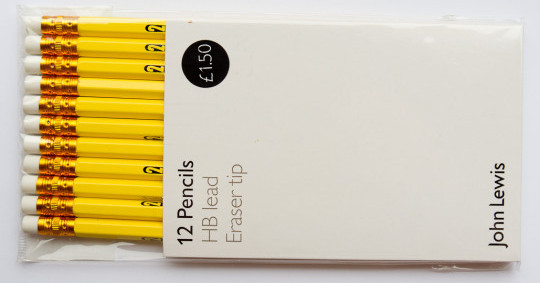 As stated earlier, the pencils are made in Thailand, so I thought I compare them to some other Thai pencils. By coincidence the Thai pencils I want to compare them to also have a Scottish link: they’re from John Lewis. I would describe them as Mongol copies or Mongol type pencils, but as you can see,  in comparison with a real Mongol they exhibit a more aggressive shade of yellow. A dozen of these Mongol type pencils used to cost £1.50. I’m not sure whether the price has changed since I bought these, I should check next time I go to a John Lewis store.

Except point retention, mentioned earlier, these pencils are surprisingly good. The John Lewis pencil feels a bit smoother though, and slightly darker, with slightly worse point retention. The John Lewis eraser is also smoother and cleaner, but I guess that doesn’t really matter. People buy the Popcult pencils because of the quotes, not because of superior performance – and for novelty  pencils they are really good!

Sarah from La La Land let me know that they have updated the shop with new photos showing the exact colour the buyer will receive. I think she might also get a new quote for the Star Trek set [1]I don’t think any Star Trek fan dislikes “Beam me up Scotty”, it just hasn’t been said in the TV series..

Price (except John Lewis pencils) and exchange rates: May 2014.

I’d like to thank Sarah from La La Land for the additional information she has provided regarding the Popcult pencils.

You can find more information about Chambers at Palimpsest.

After seeing my link on facebook about the effects of erasers on paper [1]Sorry, I didn’t find an English, only  a Dutch and a German version of the paper. you must have guessed that the next post is about erasers, so today: a belated blog post about the Pental Ain Clic, an eraser in a pen shaped holder [2]Previously reviewed at East…West…Everywhere.. There are strong links to the recent Temagraph blog post: More or less the same eraser is also available under the Temagraph brand.

The body of the Ain Clic eraser is made in Mexico, while the eraser itself is produced in Japan and is composed of PVC and DINP. Just a warning, the P in DINP stands for phthalate, which you might have come across in the news. In the EU DINP is banned in toys and childcare articles that children can put into their mouths (see European Directive 2005/84/EC [3]http://ec.europa.eu/health/opinions/en/phthalates-school-supplies/glossary/def/dinp-di-isononyl-phthalate.htm ). This eraser doesn’t seem to be marketed at children, but I would keep in mind that it contains phthalates and would keep it away from children (or adults tempted to put it in their mouth). It might also be advisable to put the eraser crumbs in the waste bin ,instead of just blowing them off the paper, so they don’t end up on the desk or floor.