A few months ago I was able to get a Mascot for a good price. The Mascot is a propelling pencil made from sterling silver. A few years ago Dave showed it on his blog. 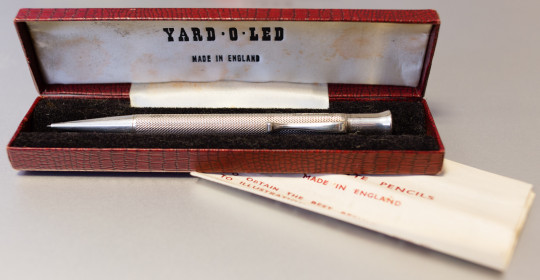 Mine is stamped with the date letter G, so it must be from 1956 or 1957 [1]see https://theassayoffice.co.uk/send-us-your-hallmarking/date-letters , a time when the maker, Edward Baker, was already part of Yard-O-Led (In 1952 Frank Tuffnell became the majority shareholder of Yard-O-Led and acquired Edward Baker [2]see http://www.yard-o-led.com/#our-story . In 1955 Yard-O-Led took over Edward Baker [3]see http://www.gracesguide.co.uk/Yard-o-led_Pencil_Co ). Despite having been part of Yard-O-Led the pen doesn’t seen to have been marketed as a Yard-O-Led pencil. This could be down to the fact that the internal mechanism works in a different way.

According to The Writing Desk all Yard-O-Led pencils ever made accept 3″ leads [4]see http://www.thewritingdesk.co.uk/showproduct.php?brand=Yard-O-Led&range=pencil+refills , but I can’t see how these could fit into the Mascot – so maybe the different mechanisms in Yard-O-Led and Edward Baker pencils and the resulting difference in leads used was part of the reason why the pen was not officially sold as a Yar-O-Led. My pencil came in a Yard-O-Led box and with Yard-O-Led instructions, but as the pen is 60 years old these might not be the original box and instructions that came with the pen.

Including leads the Mascot weighs about 28g and has a diameter of just over 8mm – round pencils tend to have a diameter of about 7.5mm and hexagonal ones have about 7mm between opposing sides. The pen a bit more than 12cm long.

Despite it being thicker and certainly heavier than a wood cased pencil it does feel small in your hands …modern pens are usually bigger, but the heavy weight  of the Mascot, for its size, makes it feel solid and expensive.

Yard-O-Led’s name came from the fact that their pencils could hold a whole yard of lead in refills. If you are of the metric persuasion: 1 yard has 36 inches, so you would need 36 of these inch long refills for a yard. My Mascot came with 6 leads, but it could probably hold around 12 leads. 12 inches are one foot, so I guess Foot-O-Led would be more suitable as a name for the Mascot than Yard-O-Led. 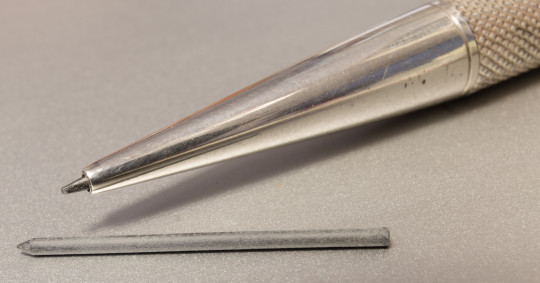 I like a fine point, so I sharpen the leads with Faber-Castell’s lead pointer sharpener box (what a name) 18 41 00. These sharpeners usually cost around €0.60. They are for leads with a diameter of 2mm, but work with 1.18mm. 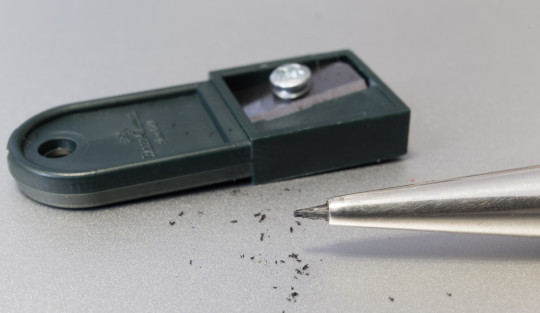 It’s a great looking pencils, even though it is a bit small for today’s standard. I love the wider top/end of this pencil. It is similar to other pens from the past. These days similar tops can be found on Graf von Faber-Castell pens or the Castell 9000 Perfect Pencil (you can see them in this blog post).

You can find more Yard-O-Led related goodness at United Inkdom, Scribble’s Too Many Pencils and Dot Cross Dot.