This week I had a quick look at Manchester’s Muji store, where I found wood cased pencils and a desktop pencil sharpener.

Manchester used to have a bigger Muji store, but it closed down, maybe about ten years ago. We now only have a smaller Muji store in Selfridges.

Manchester’s Muji didn’t have these pencils and the sharpener earlier this year [1]They used to sell wood cased coloured pencils, though., but it could be that bigger stores were stocking these products for a while already. 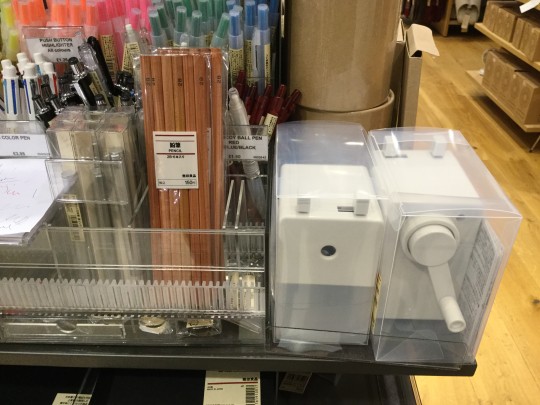 I didn’t buy them, just because Japanese pencils in HB can be to soft for my style of writing (I want a fine point that lasts) and for the kind of paper I use (normal paper). An example of this would be Tombow’s Drawing pencil in HB. I thought Muji’s 2B pencils are most likely too soft for me so I didn’t want to buy them and then end up not using them.

The pens left of the pencils seem very similar to OHTO Tasche pens.