It looks as if I lost my Perfect Pencil. My trusted companion since February 2009. With me nearly every single day since I bought it. I guess there is a small chance I will find it again, but that seems unlikely at this stage.

The Castell 9000 version is, in my opinion, by far the best version. I don’t like the look of any of the other Faber-Castell versions and the Graf von Faber-Castell versions are on the one hand a bit too ‘show off’ and they are also very heavy …which makes them feel unbalanced – plus I know from experience that if both of them fall from a meter or so on tarmac the Castell 9000 version will usually survive unharmed while the Graf von version will get a corner chipped off, because its weight made the fall so much worse. 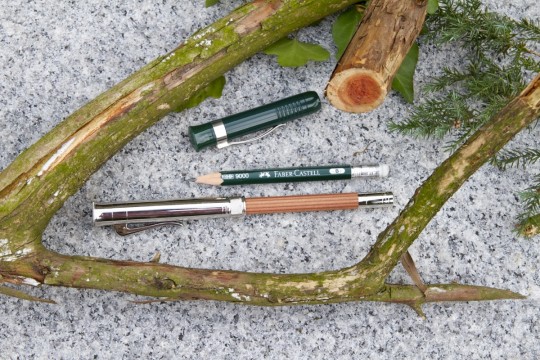 The picture is from an old blog post about the Pencil Cedar – when I still had my Perfect Pencil.

The big question: should I buy a new one, the green one again? They got more expensive in the UK. I bought mine from Cult Pens where they now sell for 12% more (when taking VAT out of the equation). On the other hand the refills got nearly 50% cheaper! [1]I used to use the long eraser-tipped 9000 in B to save on refills. Letter colour is different (gold vs silver) and the layout is different, but otherwise they seem identical except length. Even though a 12% price rise seems reasonable they are only half of the UK price when bought at Müller, a German drug store chain.

I’m not sure yet whether I pay the more expensive UK price, wait for a one from Germany or pay the premium to get the black Japanese version.

8 thoughts on “I lost my Perfect Pencil”