The time it takes to read most blog posts at Bleistift is probably a bit longer than the time most readers are willing to spend on reading them – so in an attempt to keep blog posts shorter I’ll talk about my trip to Shanghai, where I bought some nice stationery, before writing more about what I bought in two further blog posts.

In December I’ve been in Shanghai again. Unfortunately there wasn’t much time while I was there, so I only managed to see some more stationery in shopping malls I happened to pass and to visit one proper stationery shop. 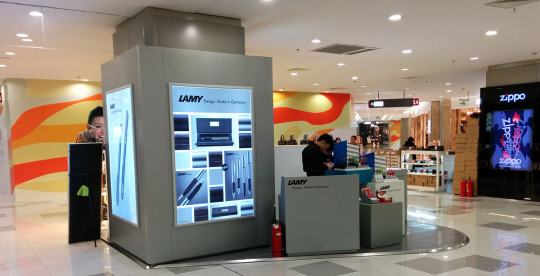 It’s not an uncommon sight to see little, open Lamy shops in Shanghai’s shopping malls. I have mentioned this in the past. As in previous years prices are more expensive than in Europe, roughly 50% more, but that depends on the specific pen you’re looking at. On a positive note: it is not uncommon to see limited edition pens from previous years that are hard to get in Europe. Funnily enough I’ve seen Lamy being sold in several places, but I haven’t seen Chinese Lamy copies, like the Hero 359 or the Jinhao 599 anywhere.

This time I’ve also seen Kaweco pens for the first time in Shanghai, it was in one of the more expensive shopping malls, called Réel, near Jing’An Temple.

The proper stationery shop I mentioned at the beginning of this blog post is a shop on Xiangde Road in Shanghai’s Hongkou district. I have visited this shop in the past. It’s not too big and there’s not too much choice when it comes to wood cased pencils, but the shop has a lot of other stationery, from the kind of stationery for children and students,  like different kinds of papers, brushes, scissors to all sorts of stationery small companies would buy.

The two most exiting items I bought were, without any doubt, Faber-Castell’s blue dust free eraser and Deli’s 0620 sharpener.