This time: a pencil made from recycled money. My colleague Dr. Mitchell Larson saw this pencil while visiting another university and brought one back.

A quick search on the Internet shows that many British suppliers of promotional pencils stock this green, recycled pencil. I am not sure whether it’s made from recycled Pound notes (less likely) or whether the colour is supposed to indicate that it is made from recycled Dollar bills (more likely). This is probably the same pencil as the one seen on Pencil Revolution in 2006. In any case, the pencil doesn’t feel as if it’s made from pure, recycled cotton paper. It’s much too hard and dense for that. I’d speculate that it’s made from plastic banknotes if I wouldn’t think it’s made from Dollar bills. Another explanation for the plasticy consistency, one which seems more likely, might be that the consistency of the recycled notes is just not right to be made into a pencil – so the recycled material might have had to be mixed with another material. Maybe there’s an even more exciting explanation: maybe the recycled notes had to be mixed with another material to make it impossible to use this pencil to forge money. Lots of speculation, but in the end it doesn’t matter why: this pencil is much more similar to a Staedtler Wopex or to a BIC ecolutions evolution than to a pencil made from rolled paper, like the ones shown in the battle of the eco pencils.

The pencil itself is round. I mention this because there is an older, hexagonal version – the one made from $7.33 of recycled Dollars.

The lead behaves and feels similar to the BIC ecolutions evolution, it’s just a bit less waxy. It’s definitely worse than a Staedtler Wopex, it’s not as dark and more plasticy, but much better than the catastrophic pencils made from recycled CD cases, which are widely used as promotional pencils. I’m not even looking for the CD case pencils on purpose, but have already come across four different ones. Two of them were left by students in different rooms in our university. I can’t blame them for not wanting to write with these pencils.

Since we’re just talking about the sharpener anyway, the DUX 9207-N is a very nice sharpener, made from black Bakelite. As far as I know this sharpener has been first produced in the 1940s. You can sometimes see people on eBay trying to sell new versions of this sharpener as antiques. The DUX sharpens with an angle of ~20°. Please take the time to click on the picture of the sharpener to see the delicate, sophisticated pattern on the lid of the sharpener in higher resolution. 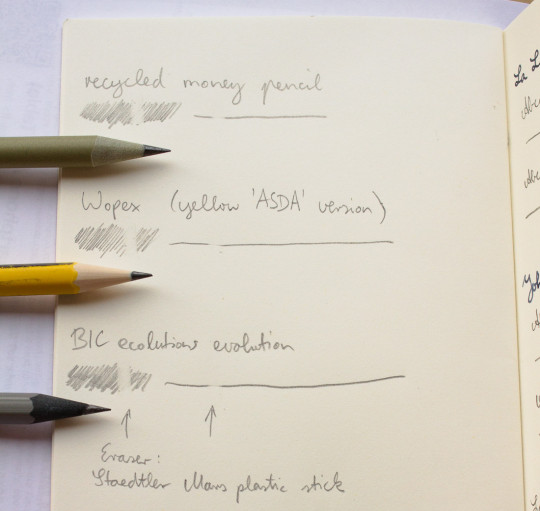 I’d like to thank Lexikaliker for getting me the Dux 9207-N sharpener. I couldn’t find it in any local shops.

I’d like to thank Dr. Mitchell Larson for the recycled money pencil.

A recycled money pencil has been recently mentioned in the Erasable podcast, probably in Episode 5.