Now that Pencil Revolution mentioned my blog posts featuring pencils on telly I feel I should add some more. Speaking of the Pencil Revolution: I also noticed pencils on Revolution – and I was shocked how carelessly they use the pencils as well as other sparse resources …but then they also didn’t really honour their irreplaceable pencils in Stargate Universe.

You might have noticed that my “Seen in the wild” pencils often mention my favourite pencil, the Noris. This is just because this pencil isn’t that often on TV. If I’d focus on the Ticonderoga I’d have a lot of screenshots to show – a big proportion of Malcolm in the Middle and The Big Bang Theory episodes feature this nice pencil.

So, today the focus is on the Staedtler Noris.

Not yet posted on Bleistift and in chronological order:

In episode 1 they are mainly using Staedtler’s Tradition. In later episodes the Noris is more common. In the second screenshot you can see Basil Fawlty (John Cleese) sharpening his Noris with a knife.

In episode 7 you can see Chief Inspector Köster using a pencil that looks like a Castell 9000, but today is Noris day, so I won’t show the Castell 9000.

They also had some really nice pen trays in House of Cards.

You can see the Noris being used in the Commissario Montalbano episodes Le Ali della Sfinge / The Wings of the Sphinx and  La Pista di Sabbia / The Track of Sand in this blog post.

You can see the Noris being used in the Tatort episode Liebeswirren in this blog post about the Noris.

You can see the Noris being used in the second episode of Fangavaktin (The Prison Shift) in this blog post.

You can see the Noris being used in the second season of The Armstrong and Miller Show in this blog post.

The Danish Prime Minister and his advisor on a trip to England. Each of them has a Staedtler Noris in front of them on the table.

I haven’t watched this film, but Sean was kind enough to tell me about it and to send me this screenshot.

Comrade John from the Pencil Revolution sent this screenshot from The Bletchley Circle, a murder mystery set in the famous [1]If you’re into Cryptography or Computer Science you will have heard about it. Bletchley Park in 1952. I’m not sure though they would have used a Noris in H there [2]OK, it doesn’t have to be H – the Malaysian Noris has shown that same colour doesn’t necessarily indicate the same pencil grade. – Staedtler took the Royal Sovereign Group over in the 1970s, so the code breakers would have been more likely to use Wolff’s Royal Sovereign. 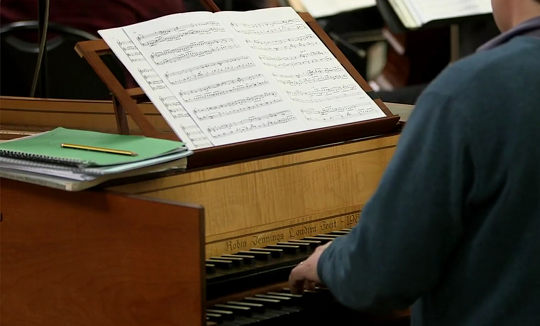 I haven’t watched this documentary either, but Sean was kind enough to tell me about it and to send me this screenshot.

If you want to see a Noris being tortured you should head over to Bodyform‘s video (if you don’t want to see the horrible bit, skip a few seconds around 1:13). Rad and Hungry‘s boss Hen Chung posted this video on her Facebook page , which was then also shared on Bleistift’s Faceboook Page [3]The one I haven’t mentioned on this blog yet..

I’d like to thank Sean for the Quartet and the Bach: A Passionate Life screenshots.

I’d like to thank John for the The Bletchley Circle screenshot.

You can see more pencils in the wild by following this link.

15 thoughts on “The Noris, then and now”