It took a while, but just before the year is over here’s the second Bleistift blog handicraft post.

The creeping feeling that I am too old fashioned didn’t get better when, just before Christmas, I saw an old friend I haven’t seen in many years. At one stage I took the X17 out of my shirt pocket to make a note of something when he let me know that paper notebooks are old fashioned and how surprised he is that I don’t make notes in my mobile phone. My counter argument was that I must be modern because he’s the one with the analogue watch [1]Yes, I know what that the Hitchhiker’s Guide to the Galaxy says that humans are so amazingly primitive that they still think digital watches are a pretty neat idea. Well, I do think that they … Continue reading, but he said his watch is a quartz watch, so it is in fact modern, so me having a digital watch doesn’t cancel the old fashioned paper notebook out.

I guess stationery users are seen as being old fashioned…

Not that my student or my friend would read my blog, but here’s a handicraft blog post to combine the old (stationery) with the new (well, not that new any more). 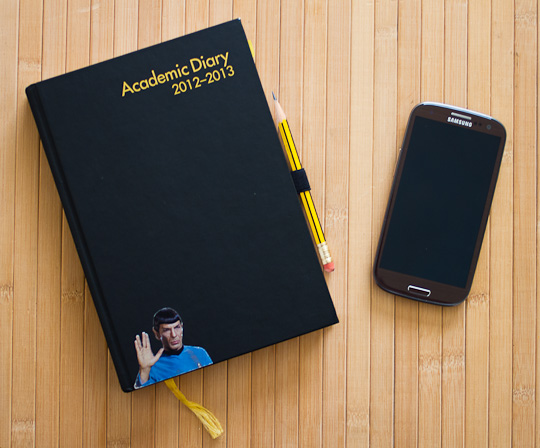 At work I tend to carry my diary with me [2]My colleagues and I get them free from our employer. If you have an NFC-enabled phone [3]These phones have been around for six years now, so I’ll accept the argument that this is still old-fashioned, but it might be new to some… you can use ‘old-fashioned’ stationery to automate certain tasks, e.g. setting the phone to quiet/vibrate in meetings by putting the phone on your diary. The stationery is not actually necessary, but makes the whole experience more exciting and aesthetically pleasing.

How to do that? You need NFC tags and software that lets you set up the desired actions on your phone. The phone will notice when you put it on an NFC tag and will then do whatever you told it to do earlier.

You can buy NFC tags you can write information on. These tags are very useful for automating tasks as you can store the tasks directly on them – but these tags cost money. On the other hand you can use existing NFC tags, even read only ones, to automate tasks. The phone will then remember which tag is supposed to activate which action. In my example I am using my staff card from work. It comes with an NFC tag so that I can log on to printers or copiers. Now I use it to set my phone to quiet. I just need to store the card in my diary, tell the software that if it detects my staff card it should be quiet and whenever I put the phone on the diary, e.g. in meetings, I can be sure the phone will not make people spill their teas and coffees when it starts ringing.You could of course think of other tasks to launch, too, and attach the appropriate tag on selected stationery, e.g. play “Ode to Joy” when your phone comes close to your Eberhard Faber Blackwing 602 or play “Big in Japan” when your phone is near the Tombow pencils.

The software used in my example is “AnyTAG NFC Launcher” for Android. If you have writeable NFC tags you could try “NFC Task Launcher”.

If you don’t want to spend money on NFC tags: some department stores use NFC tags for stock control, mainly for clothes, so you could keep those and reuse them on your stationery.

To be honest, I’m not sure I will keep that software installed. If I find out that battery life of my phone suffers I might stop using NFC tags to launch certain tasks.

2 thoughts on “Handicraft with Bleistift II”