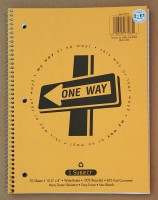 Seeing this notebook in the The Works store in Southport, I couldn’t resist but buy it. It looked like it had character. The paper didn’t have the sterile and boring look printer and copy paper has. It looked a bit rough and it looked a bit as if it was made on older machines – and even better: it’s Made in USA, you see too few of these products here in Europe. There’s the occasional Scotch tape, Made in USA (I’ve even seen these in China), and there’s the occasional pen and eraser, but that’s about it. Other promising details on the cover are: 100% recycled, more smear resistant, easy erase, less bleeds.

I cannot deny that I was quite disappointed after trying the paper out. One claim is not true – Less bleeds? The ink is bleeding was bleeding through the paper at a phenomenal rate. I was trying to write as fast as possible to compensate, but no use. Unless the paper was stored wrong when being shipped to Europe or unless ‘less bleeds’ refers to the sheets having softer edges, resulting in fewer paper cuts at the edge of the paper (‽), ‘less bleeds’ is certainly not an attribute of this paper.

Good news however regarding the ‘more smear resistant’ and ‘easy erase’ claim. It is easy to erase graphite from this paper and the paper is definitely more smear resistant than probably any other paper I know. The paper is very soft, but the surface is rather unusual. Graphite does not stick to the surface as it does on most other paper. This results in most pencil strokes looking very light, certainly much lighter than usual. Some pencils like Faber-Castell’s Castell 9000 2B leave much lighter marks on this paper than on other paper. For other pencils the difference is not as big, most notably for the Chinese made, yellow Amos Dixon Ticonderoga HB, a pencil I came to like. The pencil point of this Ticonderoga does not last very long, it is being ‘eroded’ at an incredibly fast rate for an HB pencil, but it does write well and, I am sure I heard this before in the context of the Blackwing, the lead being used up so fast makes you feel like you’ve done some work [1]Update: I found a comment from Henrik about this.. The American-made General’s Kimberley 525 2B yielded excellent results, too. 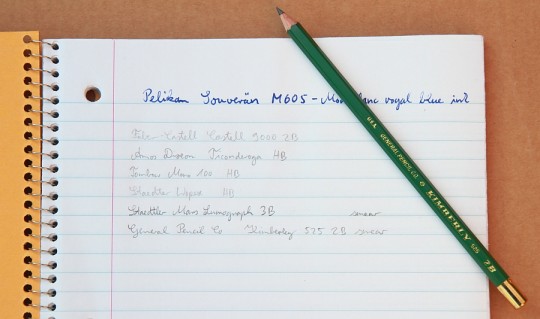 I assume the Norcom notebook #77073 is either not being made any more or is not made for the American market, as it is not listed on Norcom’s website.

More about the General’s Kimberley 525 at pencil talk.