Today: a mechanical pencil – The Faber-Castell TK-Fine, which is – despite the similar name – quite different to the TK-Fine Vario L, discussed by Dave. or the TK-Fine Executive, also reviewed by Dave.

Price-wise the TK-Fine is only about a third of the price of the TK-Fine Vario L. The TK-Fine is also slighlty cheaper than the Executive version, but this price difference is not that big.

All of the different TK-Fine pencils come in Faber-Castell’s famous dark green colour you know from the Castell 9000, but the TK-Fine version does not have the twist eraser, nor does it have (adjustable) lead cushioning. Another difference is that the Vario has a grooved metal grip area and that the Executive has a similar plastic grip while the TK-Fine‘s grip area is very much like the Apollo‘s. The Apollo has unfortunately disappeared, but a few weeks ago Lexikaliker had a post about the Apollo (Google translation of Lexikaliker’s Apollo post) and he was even kind enough to give his Apollo to an artist whose Apollo broke after 15 years of intense use.

The Apollo was available from 1983 until 2000. Different version can be seen in Lexikaliker’s post and in my opinion the Apollo XL looks just beautiful!

The TK-Fine has been available for over ten years and looks very similar, the main difference in appearance being the different top cap. It is actually being manufactured using the same tools that were used to make the Apollo, but the TK-Fine is made for technical drawings with a rigid, but fully-retractable lead sleeve, similar to the one you might know from Staedtler’s Mars micro. The Apollo on the other hand was made for writing and had a sliding sleeve that retracts as the pencil is used. 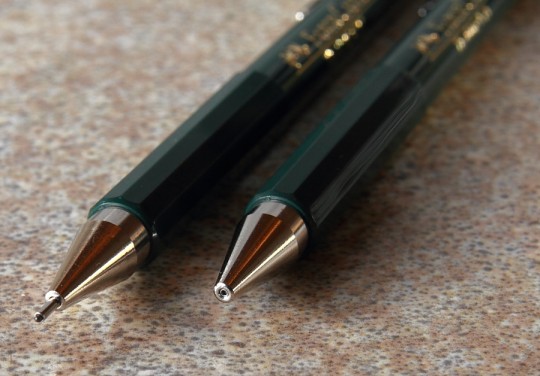 The TK-Fine offers great value for money if you find a shop that sells it for a reasonable price, but since it is not a common pencil you might have problems getting hold of one.It comes with 3 super-polymer leads in HB, offers a pocket-safe lead sleeve (fully-retractable), it is colour coded according to ISO for lead width, it has an adjustable lead-grade indicator (2B – 4H, plus one neutral setting) and the eraser comes with a cleaning pin.

I would like to thank Ms Schaklies from Faber-Castell Customer Care for the additional information about the TK-Fine.