I have been looking forward to receiving Staedtler’s Wopex in 2B and in 2H since I started using the Wopex HB a few weeks ago. Even though writing with this pencil is somehow strange, it is also quite nice at the same time. If the Wopex is not over-sharpened and if you write on the right kind of surface it will perform really well. Another thing I should mention is that the Wopex does not smudge, something I find quite important (others might not care).

Back to the main topic: I received the Wopex in 2B and in 2H and after trying the new pencils for a few seconds I was quite disappointed. Not because they do not perform well (they are nice writers), but because I really struggle to find a difference between the 2B, the HB and the 2H. They lay down a line of the same intensity, they ‘shade’ paper the same way, erasing them is virtually the same and they all do not smudge either.

Is selling the same pencil under different grades some sort of marketing trick?

Did I get a bad bunch?

…or does the production process mean that the different grades of lead are the same at the ‘start’ of the pencil and the real lead will appear after more sharpening?

I would be very interested to hear whether other Wopex users have the same problem. 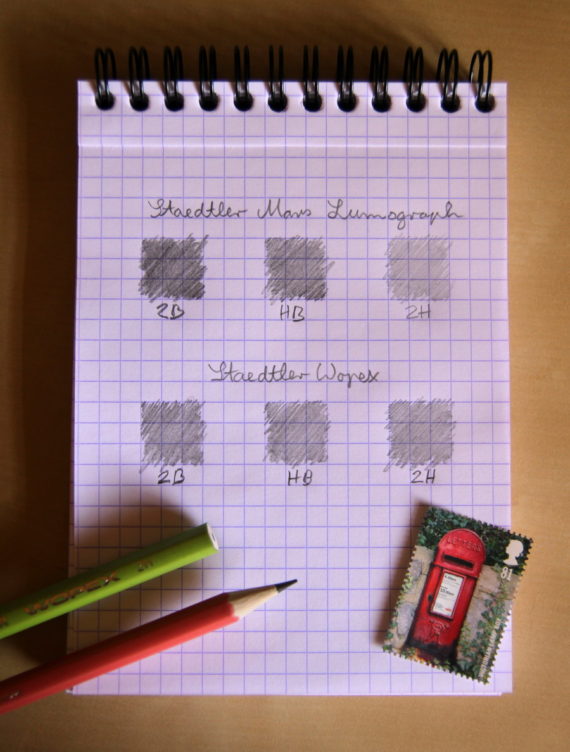 You can find a review of the Staedtler Wopex HB at pencil talk.

The Staedtler Wopex was recently mentioned in the Battle of the eco pencils post.

My mother bought the Staedtler Wopex 2B and 2H from Bürobedarf Jäcklein in Volkach and sent them to me. At about €1 each they were rather dear, but you can find them cheaper online.