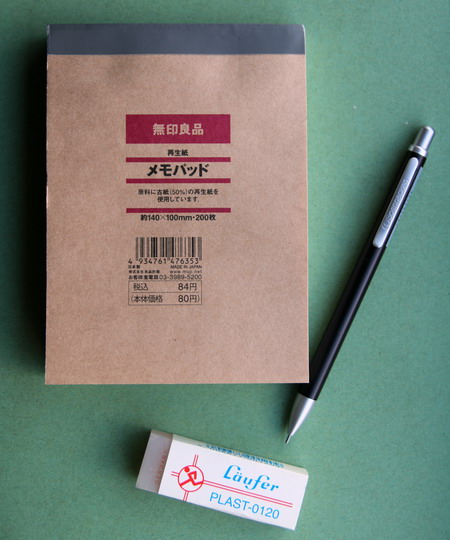 The Memo Pad (item code 1476353) has 200 sheets and is made from 50% recycled paper [1]At least according to the information provided by Muji. In the previous years there have been some concerns about the accuracy of the figures given by the manufacturers as several large Japanese … Continue reading. As expected the recycled paper is not pure white. The colour of the paper  from my memo pad is slightly more green than other recycled paper I know, but this might not apply to all Memo Pads. Writing on it with a pencil is working really well. Writing on it with a fountain pen is a very different thing though. It is actually quite problematic as the paper soak the ink up really fast. Enhanced difficulty – I used a really wet writer: the Lamy 2000 fountain pen and tried to use it on this paper, but writing very fast and with few pressure. It didn’t really work well either (as you can see). If you want to use this paper with a fountain pen (even if it not such a wet one) you will have to live with the fact that you can also see the ink on the reverse of the sheets. 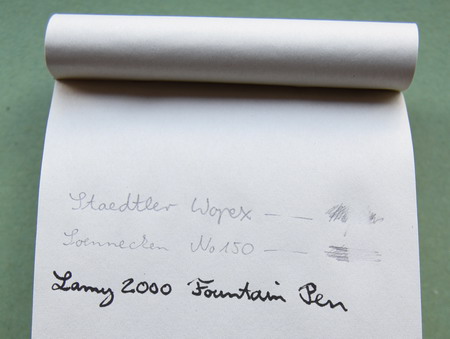 The odd thing is that the Memo Pad is not A6, but that someone from Muji UK seemed to think it would be a good idea to advertise it as A6 because it is a bit like A6. Most readers of this blog are from the USA, followed by Canada. As far as I know the ISO 216 format (i.e. A4, A5, ..) is relatively unknown in North America (please correct me if I am wrong!), maybe except among pen and stationery aficionados, so here is a bit more on ISO 216:

In 1786 physics professor Georg Christoph Lichtenberg wrote a letter to a friend. This letter included, amongst other things, a discussion about the materials used for paving the streets in London, and the idea that it would be nice to base paper sizes on a single aspect ratio of √2 (I am however not sure whether Prof. Lichtenberg or his English student thought of this). The advantage of this aspect ratio is that you can halve the paper, but still get the same aspect ratio. In 1922 Dr. Walter Porstmann made this idea, together with some fixed sizes and other bits and bobs, into the DIN 476 standard ..which became the ISO 216 standard. The A6 standard should have 105 mm × 148 mm (with a tolerance of ±1.5 mm). The Memo Pad is labelled as being 140 mm x 100mm, but is actually 138 mm x 99mm.

All this A6 fuss? Much ado about nothing. Only engineer type people will be shocked, everybody else can’t be bothered. Not A6, but nearly A6. Not labelled A6 in Japan, but sold as A6 in the UK. Luckily it is smaller, not bigger, so it will still fit in folders and holders, etc. Paper good for pencils, bad for fountain pens. Good price. The End.

I would like to thank Lexikaliker for the Läufer eraser used in the photo.