After my 2012 blog post about the Atoma and the M by Staples’ Arc notebooks [1]…to my surprise it is still by far(!) the most popular blog post at Bleistift, even though it is a few years old. I have been asked more than once whether the Staples ‘desktop punch’ can be used for the Atoma system.

The short answer is that it works well.

Why would you want to use a hole puncher [2]I know they are not holes, but I will stick to this name for now as it is commonly used. not designed for your system? Well, it is much cheaper. The Atoma hole punch currently sells for around £140 (~$205; €185), the Staples one can be bought for around £35 (~$50; €45). [3]I got my Staples desktop punch for my birthday many years ago, so I am not sure, but I think prices were pretty similar at the time. 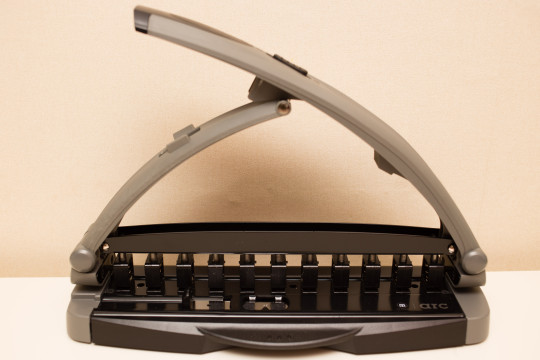 Not surprisingly holes punched with the Staples desktop punch, when used with Atoma discs, seem a bit worse than the original Atoma holes [4]I assume that Atoma punched paper, used with a Staples discs, would also be slightly worse than Staples punched paper. – but in my opinion Atoma makes the better notebooks, while Staples makes the affordable paper puncher, so I will stick with this combination.

The M by Staples arc desktop punch is sturdy and well made in Taiwan and can officially punch up to 8 sheets in one go.

If you want to read more about Staples’ Atoma clone have a look at the Arc It Blog (not updated anymore).

Price and exchange rates: May 2016

As usual: open in a new tab/window to see the images in high resolution (except the last image).