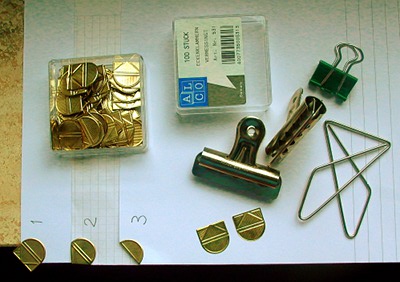 Today we have some sort of premiere at Bleistift. The first guest post (..if this counts as a guest post).

Diana, who in 1980 was my first English teacher, read my recent post about the Japan Clips and send me a photo and additional information about some other unusual clips she bought in the past, including the Eckenklammern from ALCO.

Here are the “Eckenklammer” corner clips, which I used as in 1,2,3. They are flatter than a normal paper clip and hold the paper tighter. I think they are only meant for 2 or three sheets, though, but they do look really good on “important” papers.

As mentioned before Diana’s Eckenklammern were from ALCO, a family business established in 1906. They are also available from other companies and I assume that all the different corner clips come from the same manufacturer as they all seem to look the same.  They are size is 18 x 18 mm and about  0.25 mm thick.

I would like to thank Diana for making me aware of this product and for the photos and the explanation. 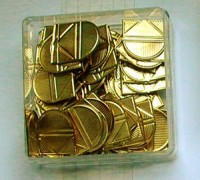