The Danes have it good. They can already enjoy the second season of The Legacy / Arvingerne while here in the UK the first season only just finished.

There were of course pencils to be spotted in the first season. While previous pencils spotted in Danish TV series were either German or unidentified we hit the jackpot this time: a Danish pencil!

As mentioned in a previous blog post I’m quite lucky to have some Danish stationery, most from Henrik and some from Rad and Hungry. This meant that I was able to spot that the Viking pencil in question is the older, pre-2012 version of the Viking Skjoldungen 400. At that time the Skjoldungen was still offered in B, HB, H and 2H – labelled using the Thoreaus’ system, i.e. using numbers 1-4. Now the Skjoldungen 400 is only available in HB – and labelled as HB, not as #2 [1]Viking still has some old stock left though (February 2015) which can be bought on their website..

The Skjoldungen 400 is a really nice pencil. My main issue is that the HB/#2 is a too soft for my taste, it is softer than most European HB pencils and  doesn’t keep the point long enough to be convenient for writing lots of text – at least not if you are writing using rather small letters like I do (That’s why I love the Deli 0635 and mechanical pencils with 0.2 or 0.3/0.35 mm leads). The #3 pencil on the other hand is in my opinion already a bit on the hard side for everyday writing. It is however not really harder than other H pencils [2]So the HB is quite a bit softer than other European HB pencils, while the H is in the same league as other H pencils.. It would be great if Viking’s HB was a bit harder or if there was an F pencil …but since they even stopped making this pencil in B, H and 2H there’s not much chance of an F pencil being made, I guess. 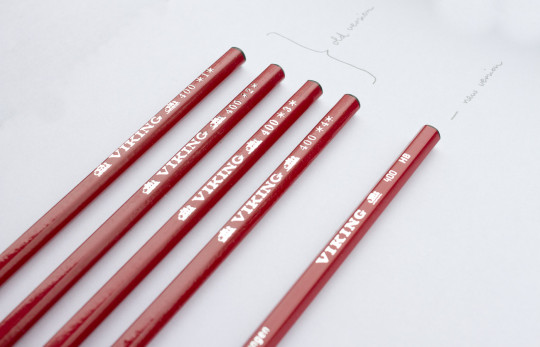 Even though the HB pencil is too soft for me when it comes to everyday writing, it might be suitable for many or most other pencil users – many other pencils that are too soft for me, like some Japanese HB or Palomino pencils, seem to be used and preferred by lots of people, so don’t let me put you off if you have a chance to try this pencil for yourself.

I believe that the use of the the screen shot of the Viking pencil, taken from the seventh episode of the first season of Arvingerne falls under “fair dealing” as described by the UK Copyright service.