My father was a joiner. When he used to make plans for customers he always used to label them with this stencil. I think this stencil is one of the earliest things I remember from his workshop. He used it until he retired, when he was in his seventies.

A few years ago I decided to take it with me to the UK. At that time it was still in perfect shape. I kept it in a plastic bag for a few years and I couldn’t believe my eyes when I took it out of the bag recently. The stencil was completely deformed and the surface was very oily. I assume something from the plastic bag somehow interacted with the plastic form the stencil.

What a shame. I put some heavy books on, in the hope that it will help get the stencil at least a little bit back into shape, but I am not too confident that this will work. 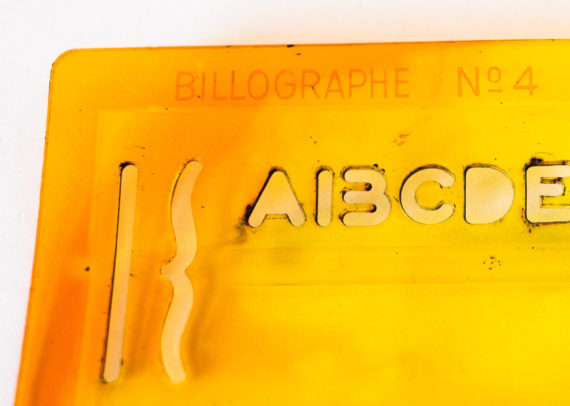 It looks as if these are still being made, at least in some sizes, but they seem to be extremely difficult to get hold of outside France [1]In Germany Standardgraph, which you might know because of their DUX sharpeners, is selling similarly coloured stencils – not only letters, also stencils to make plans of rooms, etc..