Welcome to my blog post about the Lamy 2000 mechanical pencil, which was provided for free by The Pen Company. This blog post has also been published on their blog.

The Lamy 2000 was first released in 1966 so this year is its 50th anniversary – and after several special editions covering materials like grenadill wood, ceramic, titanium, and more, we can expect a new special edition in 2016. I went ahead and compiled a list of the special editions so far, which can be seen at the still unnamed pen wiki. I checked with the company that handles the launch of the 50 years Lamy 2000 special edition. They checked with Lamy and I was told that the list is complete. I wonder whether someone has all of them. Maybe the person who bought the Jonathan Ive and Marc Newson special edition in red?

It’s still not clear how the special edition will look, but however it looks, the ‘normal’ edition is stunning in itself. The main body is made from Makrolon (polycarbonate) and the surface is brushed, which means that use over time will slowly start to polish the surface and it will become shinier. This reminds me very much of Lexikaliker’s ‘beauty through use’ post (Translation / Original). It is a beautiful concept and idea and just one of the things I love about the Lamy 2000. 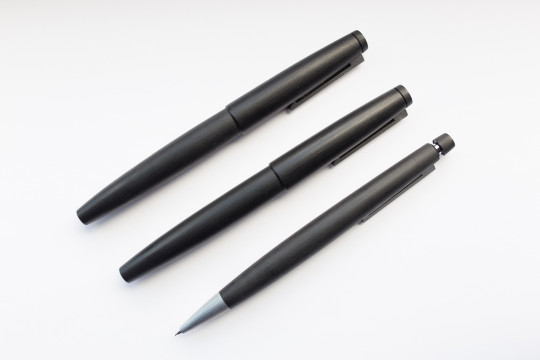 The surface of the Lamy 2000 in the middle changed after years of use.

Even though I’ve been using Lamy (Safari) fountain pens since the 1980s, I only bought my first Lamy 2000 fountain pen in 2008. The most expensive fountain pen I had before that was probably a Parker, which was less than half the 2000’s price. Before I bought it I was looking at the 2000 pen for several months before I decided that it’s worth the €89.95(~$102; £72) it cost back then, and in the end I got this pen as a Christmas gift that year from my wife. It’s a great pen! After I got it, it was the only fountain pen I used for a very long time. One unusual thing about my 2000 fountain pen is the enormous ink flow you get if you start using a bit of force. The M nibbed one I have is like this, but I wouldn’t know whether all Lamy 2000 in M are like that. Well, I liked this pen so much that I bought an EF version a bit later, mainly because of the fairly big line variation I got from my version in M.

Even today, after Lamy has increased their prices a few times, they provide excellent value for money. You won’t find many piston fillers with a gold nib for the price the Lamy 2000 fountain pen sells for – and you’ll find even fewer fountain pens as handsome as the Lamy 2000, especially not for this price. 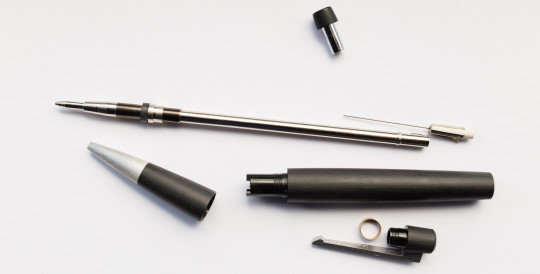 Well, technically it’s not really the 50th anniversary of the Lamy 2000 mechanical pencil; even though the fountain pen was released in 1966 the mechanical pencil was only added in 1970 (and the ballpoint pen in 1968).

Despite loving wood-cased and mechanical pencils, and despite the good reviews out there, I hadn’t had the pleasure of using a Lamy 2000 mechanical pencil until I got one from The Pen Company in January 2016. 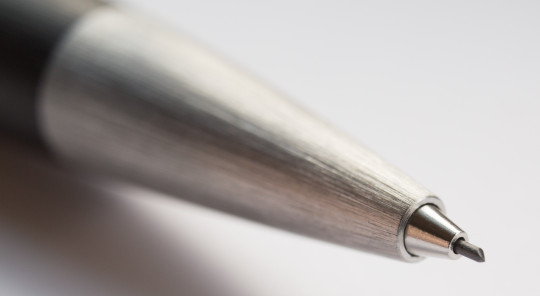 My first impressions: the Lamy 2000 mechanical pencil was much lighter than expected. I know these numbers won’t mean much to most readers, but in case you want to compare it to another pen, here are the vitals: The length of the pen is just under 14cm, with the thickest part of the barrel having a diameter of 12mm. The weight is just under 19g. The centre of gravity is very much in the middle as you can see from the picture where the 2000 is balanced on a type.

What a well-balanced pencil!

One of the other things I noticed first was that the Lamy 2000 pencil is much slimmer than the Lamy 2000 fountain pen version. As I was used to the thickness of the fountain pen version I did initially find the mechanical pencil too slim, but by now I like it the way it is. The clip has a similar design as the fountain pen, but again, is slimmer. This is a good thing as many users of mechanical pencils will rotate them in their hand, so a slimmer clip makes it less obtrusive when it rests on the purlicue between the thumb and index finger. You’ll still notice the clip in your hand though, because the corners are not rounded – the clip is still quite noticeable and can even be distracting.

If you write using a fairly acute angle, i.e. if you hold the pencil very flat, the pencil’s body can still be too wide, especially when writing near the spine in a notebook where the pages don’t lie flat. In that case, the body of the pen can touch the paper, making writing difficult – but this issue doesn’t usually occur. 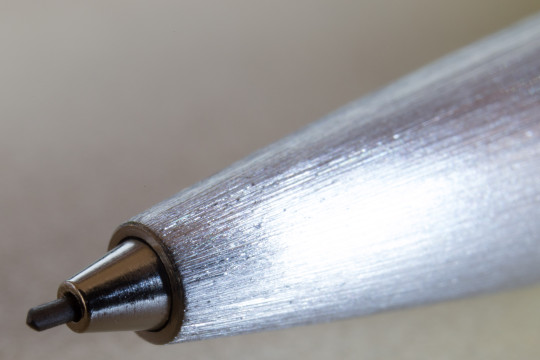 The good thing about the cap is that it fits quite firmly on the pen and there is no danger of it falling off by mistake. I mention this because the cap of the my Caran d’Ache 844 is quite loose and can come off easily. 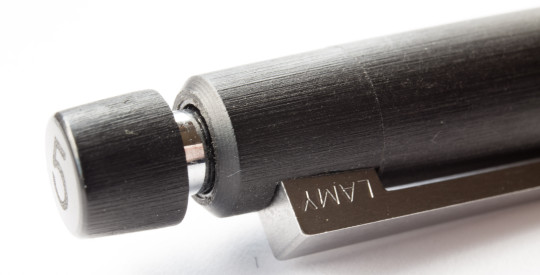 Speaking of the cap: the 5 on the cap seems to be laser etched, similar to what you get on some keyboards, so I don’t expect the 5 to rub off anytime soon. 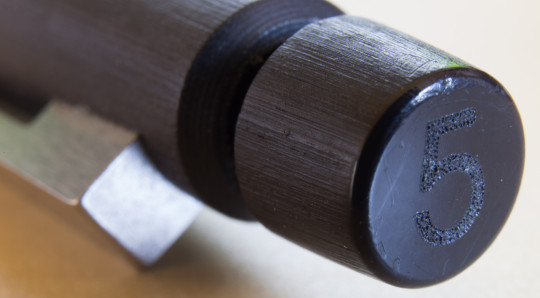 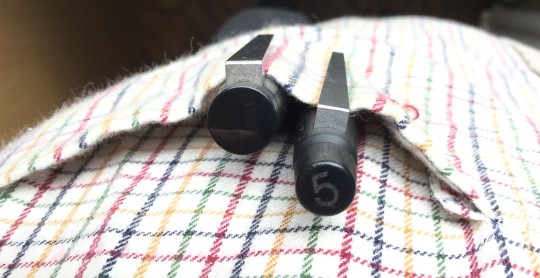 I would like to thank The PenCompany for providing this pen free of charge for this review.

You can find more about the origins of the Lamy 2000 design on the Fountain Pen Network.

Dave has a review of the Lamy 2000 mechanical pencil too. 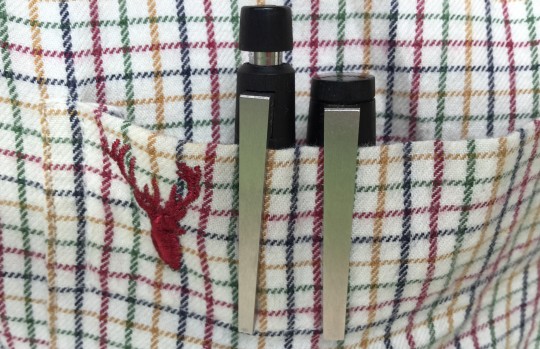