Having used Kaweco’s AL Sport stonewashed fountain pen since 2014 I thought that a stonewashed pencil might look rather nice, too. Unfortunately, the ‘Stonewashed series’ only includes a fountain pen, a ballpen (that the official name) and a rollerball – no mechanical pencil (or push pencil, the name used by Kaweco).

The ballpen and the push pencil look very similar, so I thought it might be possible to simply use the AL Sport pencil mechanism in the ballpen body, but that would mean having to buy the ballpen even though I wouldn’t use it – and it’s just guesswork that the parts would fit, so earlier this year, in February, I contacted Michael Gutberlet from Kaweco asking whether there is or will be a AL Sport stonewashed pencil. I had his contact details from an earlier email exchange in 2013, when Michael Marzani from Just Another Pen and I were discussing the brass body of the Kaweco Liliput he reviewed in his blog. As part of the discussion Michael Marzani contacted Michael Gurberlet, who was providing information about the brass he used for this pen.

To my surprise Michael Gutberlet then made a Prototype [1]A real prototype 8^) not like this year’s April Fools Day Prototype. Kaweco and Prototype, that reminds me of SBRE Brown’s blog post and video about the Kaweco Ranger, which, as far as I … Continue reading for me. I got the impression that the main issue when creating this pen  was the push button, but since I don’t have an AL Sport ballpen I can’t really comment how much the ballpen and the pencil’s push button differ. I assume the top looks the same, but the button is different, probably because the pencil push button is held by the lead pipe, but the ballpen push button is on the click mechanism – but this is pure speculation. Michael Gutberlet seems to be very hands-on with the pens he creates, so as far as I know he made this prototype himself. He also finishes each Lilliput Fireblue fountain pen individually. Massdrop is currently selling them for $139.

In March 2016, when the pencil was ready, I was contacted by Sabine Götz – and she called it a prototype – how exciting! The word prototype hadn’t been mentioned before, so that was a very exciting moment. I guess this makes this pencil a one of a kind.

I also got a bill. The pencil was a bit more expensive than the AL Sport stonewashed fountain pen I bought a few years ago, but that was more down to the fact that I found a shop that sold it for a good price. I guess what I paid for the pencil is similar to what the official retail price for an AL Sport stonewashed pencil would be. 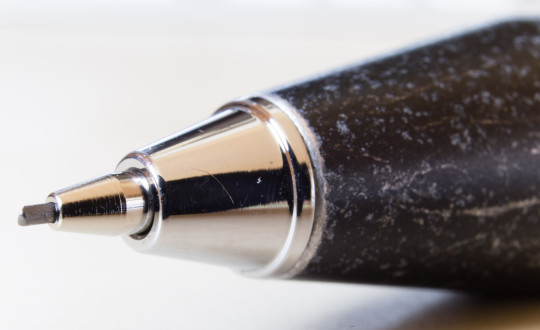 The pencil itself is quite stubby, but all Kaweco Sport push pencils are, so I knew what I was getting. Nevertheless, I think the stubbiness makes the pencil less elegant than the fountain pen version. The pencil takes 0.7 mm leads. According to the mini manual that came with the pen there seem to be versions of the Sport pencil in 0.5 mm, 0.7 mm, 0.9 mm and 2 mm, but I don’t think I ever saw the Sport in 0.5 mm.

I ordered a clip for the pencil so that I can transport it easily. Pen Heaven had the best price I could find in the UK, £1.99 (~$2.90; €2.50), including postage. I do use the pen with the clip, but that does make rotating the pen (and using the lead up from all sides) more difficult. 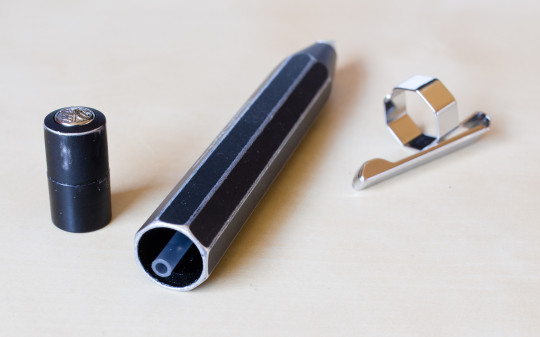 The pen itself feels solid and feels like it’s mainly made from metals (mainly aluminium) or metal alloys (the mechanism?), but the lead pipe is made of clear, slightly flexible plastic. The push button gets stuck on this pipe (friction fit). There is no eraser in this pencil.

By the way, my wife was very impressed by the lead the pencil came with. Her comments were: ‘creamy and buttery, soft, but does not smudge’. That is high praise coming from her as she doesn’t like leads that smudge …so the Lamy Scribble’s original leads had to go. Her dislike for smudgy leads goes so far that she is using H leads in a pencil that is used for an Atoma notebook (H is actually great with Atoma’s paper).

A quick look at the dimensions of the pen:

Daily use and overall verdict

I have used this pencil for a while now, together with the AL Sport stonewashed fountain pen. Together they are such a nice pair. I have to say that I always preferred using the pencil, despite its stubiness. I find the pencil’s look much less attractive than the stonewashed fountain pen’s elegance, but because it is instantly ready it was my pen of choice – there is no cap that needs to be taken off and posted first.

Overall this is a great pencil, even though I would prefer a slimmer, longer version. I wonder whether this stonewashed pencil (not my imaginary slimmer, longer version) will be available in shops in the future. I guess the original problem was that different pen parts need ‘stonewashing’ for different lengths of time, but now that there is a prototype (and a recipe how long its parts need ‘stonewashing’) it should be easier to make more stonewashed pencils.

Regarding the stonewashing: I have to add that my fountain pen has a better stonewashed effect, but this might be caused by the different shape of the parts (or, less likely, the different paint). The question now is whether Kaweco sells enough pencils to think it’s worth offering an AL Sport stonewashed pencil.

I would like to thank Michael Gutberlet for making this prototype for me.

Dries has a review of the RAW version of this pencil.

6 thoughts on “A Prototype! The Kaweco AL Sport Stonewashed Pencil”