The m9 on a tray from Muji

One of the pencils I bought in Shanghai this Winter is the M&G m9, also known as the AMP85405.

When I saw it in a stationery store [1]I think it was 立信帐册, house number 618, even though according to Google it is somewhere else. on FuZhou Road, the book and stationery road I mentioned many times before, I just couldn’t resist. Only 15元 (~$2.30; $1.60; €2.10) for this quite handsome mechanical pencil. It is available in white, grey, red and black. It feels very well made, from some kind off metal, and with 12 g it is quite heavy for it’s size. The pen’s centre of gravity is in the middle.

Well made, including the clip

It does feature a sliding sleeve, but the ‘sleeve’ is shaped more like a cone than like a pipe. This means that it is not good at what I like sliding sleeves for, i.e. sliding back while you write so that you don’t have to keep advancing the lead manually, despite only needing 4 dN – 6 dN to slide the sleeve. 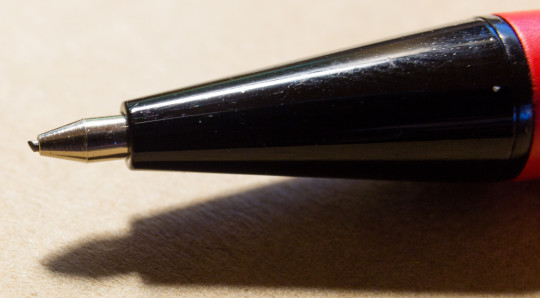 The sliding sleeve – or should that be sliding cone

Great value for money, despite the sliding sleeve not doing its job properly. I think the m9 might benefit from its centre of gravity a bit closer to the front …and maybe from having a slightly larger diameter.

You can read about a wood-cased pencil from M&G in a previous blog post.

I have added the m9 to my sliding sleeve table.