You might remember my blog post about Carl Barks, the creator of many fantastic Duckburg comics and characters [1]…like Scrooge McDuck, the Beagle Boys and many more.

Don Rosa is famous for his comics in the style and tradition of Carl Barks, but he’s also created his own characters and comic universes. It’s difficult to try to convey Don Rosa’s importance if you are not familiar with Donald Duck comics, so I’m not even trying to explain why he is the most famous Disney comic artist alive – you’ll just have to believe me. 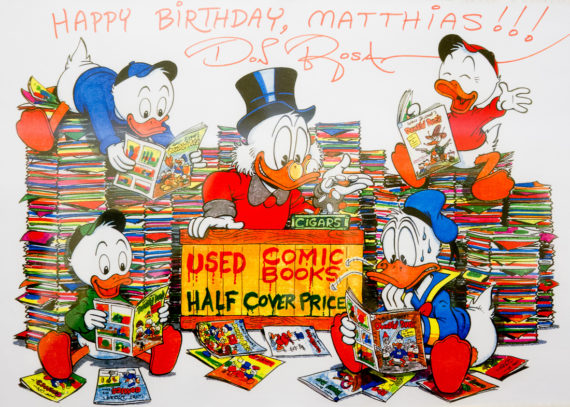 “Happy Birthday, Bleistift” would have been fitting – this blog post has been published on Bleistift’s birthday (Image © Don Rosa / Disney)

Unfortunately for Don there’s not a lot of money to be made in this field though, despite the huge popularity of his comics in many parts of the world, including Continental Europe.  Luckily he’s a really nice guy, so he despite the lack of financial incentives he’s touring Europe regularly, patiently signing autographs for his fans. I wasn’t lucky enough to ever attend such an event, but I did manage to get a print signed by him sent over to England when he was in Würzburg, near my ‘old home town’.

As part of this blog post I want to tell you about Don Rosa’s answer to my question what pencils he is using to draw his comics. Just to put Don’s quote in context – his background is in civil engineering.

First of all, remember that asking me about art equipment or techniques is
idiotic because I have never had any training and never even read about how it SHOULD be done. I just kept using the same stuff I used when I was doing fanzine work 40 years ago, which is all wrong.
But I see other cartoonists who use “normal” pencils and that seems stupid
to me. I used a .07 mm lead mechanical pencil with hard lead. That way I
could get fine detail in the drawing and it would erase cleanly. But all
other cartoonists use soft blue pencils and they never bother to erase.
I don’t think I bought any special brand, but Pentel was always cheap and common.

, but unfortunately it seems to be out of print, so the few sellers offering it charge a ridiculously high price [2]When I bought my copy it was maybe 1/10th of the current price..

As an alternative  way of finding out more about him: what about a tour of his house in Kentucky on YouTube?

I would like to thank Jano Rohleder for forwarding my question to Don Rosa.