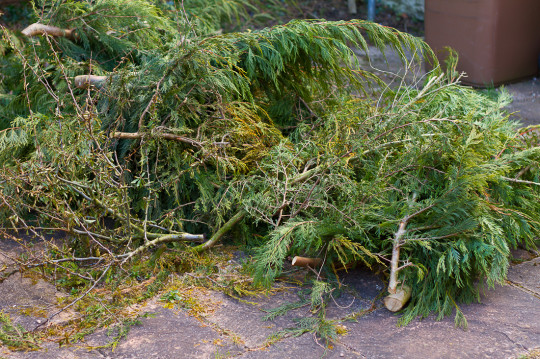 The problem –  the need for a desk stand

The idea: making a cap holder by drilling a hole in a piece of wood

There are some occasions when I’m not supposed to use a pencil, e.g. when marking assessments. I actually use mechanical pencils with different coloured leads for some assessments (e.g. programming related), but for other pieces of work I often use fountain pens1. I don’t have a desk fountain pen with a stand and you might know that they are not common any more. In the past even inexpensive fountain pens for pupils came with a case that had a plastic pop up desk stand, but these days pen stands seem to be reserved for expensive fountain pens. 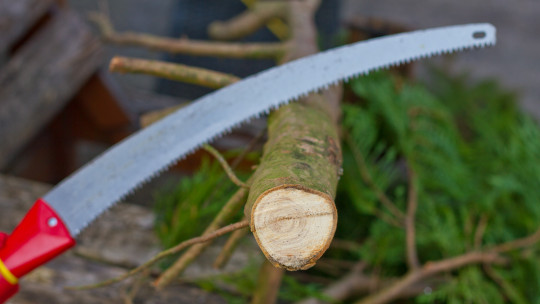 A desk stand would be handy when marking, i.e. if you only have to write a few words here and there with long breaks in between2. Unfortunately there are no generic desk stands either, at least I’m not aware of any, no wonder: every pen has a different width and what would be a good stand for one fountain pen might be too wide for another one with the result that the pen would rest on its nib, which might cause damage if no care is taken when the pen is placed in the desk stand.

The solution – a cap holder

I’m not too keen on using the word perfect, but a fountain pen’s cap would be pretty much a perfect desk stand …if it’d just stand. There’s no danger of the pen resting on its nib3, so all you need is to hold the cap, preferably at an angle that makes it easy to place and draw the pen. The solution came in the form of unwanted hedge trimmings. I cut about 4.5 cm (~1¾″) off a branch with a diameter of about 5.5 cm (~2″). I then drilled a hole diagonally into the piece of wood that was to become my cap holder/desk stand and improved it by smoothing it with a knife. In the end the hole had a diameter of just under 2cm (~¾″). I also put some walnut oil on the now finished pen holder to make it look better and last longer. 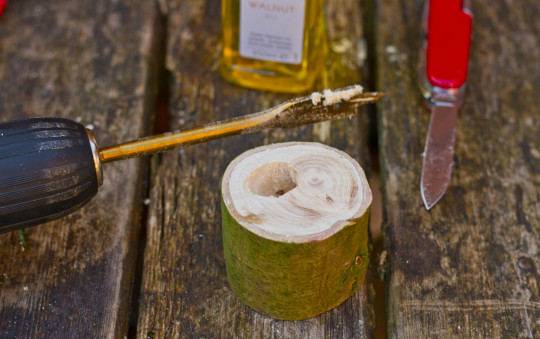 As a cap holder for a Noodler’s Konrad 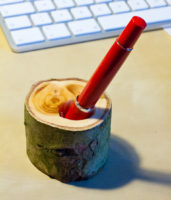 As a cap holder for a Pelikan M205

The result: a cap holder and pen stand suitable for thin and thick pens.

It can be used for pencils, but I don’t think the usefulness in the case of pencils justifies the effort of making this pen holder: even though it only took about ten minutes to make the pen holder, with most time spend getting the tools, the added comfort when using the  pen stand with a pencil is minimal when compared to the comfort when using it to hold fountain pen caps. The cap holder turns the cap into a pen stand which makes using a fountain pen very comfortable even when only using it for a few seconds every few minutes. No more picking the pen up and removing, maybe even unscrewing, the cap every time and putting the cap back on. 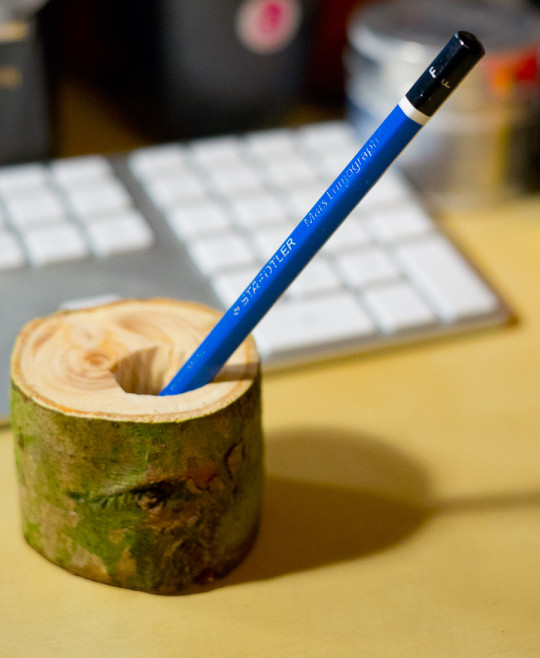 As a desk stand for a Staedtler Mars Lumograph

6 thoughts on “Handicraft with Bleistift III”