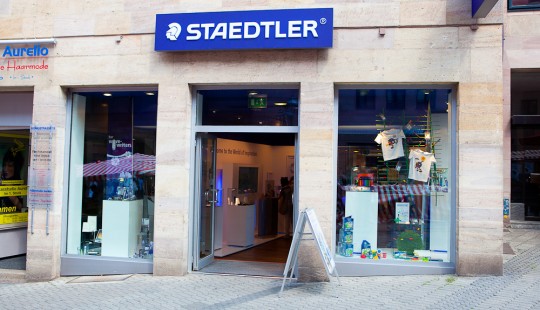 End of July I visited Staedtler Welt, Staedtler’s shop in the centre of Nuremberg.

The weather on the day was great, around 35°C (~95°F), and I even passed Staedtler’s headquarters when I drove into Nuremberg. This was because my wife, I and two friends went to Herzogenaurach first, the city where Adidas and Puma are from, and when you drive from there to the centre of Nuremberg on the Bundesstraße (B road / national highway) you pass Staedtler’s headquarters, a nice surprise and something I didn’t know or expect.

Staedtler Welt opened in November 2010 and offers a great selection of Staedtler products – obviously the best I have seen so far in a shop, but I was slightly disappointed because there were many current Staedtler products I am aware of that I couldn’t find in this shop. To be honest I was expecting to see more products, but nevertheless, the products available include some items you don’t usually see in shops, like the Mars rasor and even products that are not made any more, like the Mars stenofix.

Most of the space in the shop is used to display stationery, but there is also an area in the back of the shop dedicated to FIMO and related products, like FIMO accessories. In this part of the shop you can even find ovens and an area that is probably being used for FIMO workshops.

The employees were extremely friendly. One of the employees is originally from the UK and started to talk to our British friends who went there with me and my wife. The prices in the shop were similar to what you would pay on the high street or in a typical department store. 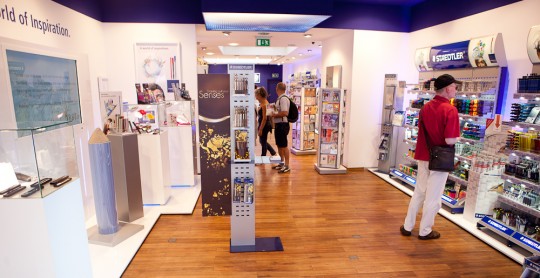 I would like to thank Vernon Antcliff for letting me know his camera when we were in Staedtler Welt.