Welcome to a blog post that is linked to my 2009 blog post about the Kuru Toga and is my third blog post this month about sliding sleeve pencils, after the M&G m9 and the 0.3mm Orenz.

If blog posts came with a soundtrack this post’s sound track would be Queen’s ‘Under pressure’, you’ll see why…

I will call this model ‘pipe slide’ for now as there is no English version with an English name out yet and one of the only things I can read on the Japanese packaging is ‘pipe slide’ in Katakana. The name is slightly misleading as the sleeve is more of a cone than a pipe. Otherwise it looks pretty similar to the original Kuru Toga, with one of the more obvious differences being the black grip area, instead of the original silver one.

More of a cone than a pipe

The idea, as with other sliding sleeve pencils, is that you can just keep writing without having to advance the lead – because the sleeve that protects the lead is sliding back further and further as you use the lead up …until you have used up the several millimetres of lead that where originally protected by the sleeve.

About the mechanism to rotate the lead

Well, the sliding sleeve works. It’s not as good as the one from the Pentel Orenz or the Staedtler Microfix S, because the sleeve is more likely to press into the paper, but it will work well.

When the sleeve is partly retracted the lead will feel a bit more wobbly, but it isn’t a problem at all. You will need about 0.05 N of pressure to slide the sleeve back, which is a pretty good value, but as mentioned earlier the sleeve is more in the way, so the writing experience you get from a pencil with similar pressure requirements, like the Microfix S, is better.

…the mechanism to rotate the lead

The mechanism still doesn’t work for me, just like the original Kuru Toga, six years ago.  It does seem to work for others. This pencil is in the Pen Addict’s Top 5 and Brad wrote: “Not a gimmick either. It actually works.”, but I assume when writing he is using much more pressure than I do.

What is your experience with the Kuru Toga – and what kind of wood cased pencils do you prefer? I’d love to find out how they relate to each other for others.

You need quite a bit less force or pressure to rotate the lead of the pipe slide model, 0.3 N in my case, but that’s still more than I seem to normally use. Things get even worse when you write in cursive, as there’ll the lead will be lifted and placed on the paper less often, so there are fewer opportunities to rotate the lead anyway.

Maybe that’s the reason why my Kuru Toga pipe slide came with a reasonably hard lead [1]harder than the lead some other Japanese pencils I have came with, so that you press a bit harder.

It’s not a bad mechanical pencil, but unfortunately it is just not good at doing what is supposed to set it apart. I wonder whether Schmidt’s [2]Not related to Lexikaliker, I think. rotating lead apparatus would have worked any better, or Kotobuki’s mechanism… 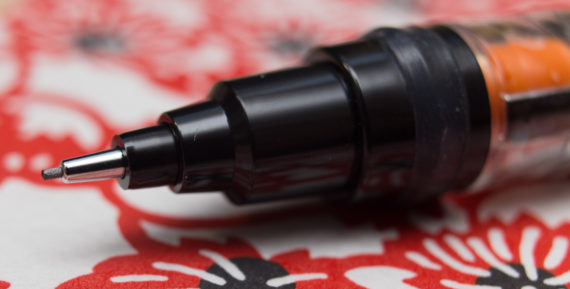 Please open the images in a new tab/windows to see them at full resolution.

The video is available in full resolution on YouTube.

I have added the Kuru Toga Pipe slide to my sliding sleeve table.

Michael Fryda has a YouTube review of this pencil.